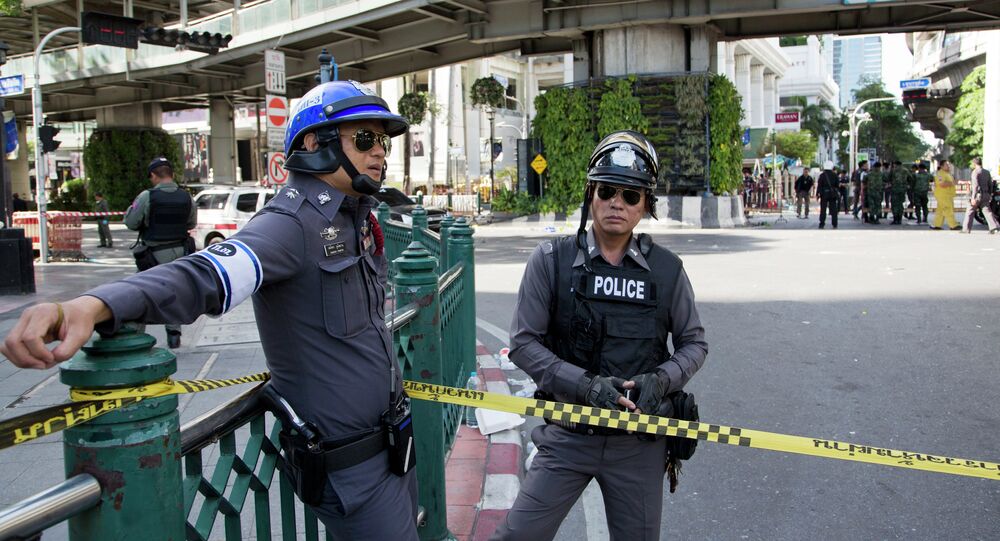 A bomb found on a busy street in the Thai capital of Bangkok has been deactivated, the national police bomb disposal commander told media on Monday.

© AP Photo / Sakchai Lalit
Thailand Seeks Interpol Help in Hunt for Suspects in Bangkok Shrine Bombing
MOSCOW (Sputnik) – The device was found and diffused a week after an explosion at a Hindu shrine in central Bangkok killed 20 people, including foreign tourists, and injured over 100. No connection has been established with last week's bombing.

"We have deactivated the bomb and will destroy it," Sky News quoted bomb disposal commander Kamthorn Aucharoen as saying.

The broadcaster added that authorities continue their search for the bomber, seen in closed-circuit footage, but are unsure if he remains in the country.

National police chief Somyot Pumpanmguang was cited as telling reporters at a briefing that damaged CCTV cameras in central Bangkok hindered the investigation.

A reward equaling $84,000 has been announced in exchange for information leading to the arrest and prosecution of the perpetrators of the deadly blast at the Ratchaprasong intersection and shopping district last Monday.