N. Korea Threatens to Turn S. Korea Into 'Sea of Fire' Over Leaflets

North Korea on Friday threatened to turn South Korea into a "sea of fire" unless activists there stop launching balloons carrying anti-Pyongyang leaflets across the heavily fortified border into the North.

"The puppet forces should not forget even a moment that the whole of South Korea might turn into a sea of fire due to the foolhardy leaflet-scattering operations," the North warned in a statement released through its official Korean Central News Agency (KCNA).

The pamphlets criticized and mocked the North's ruling Kim dynasty and highlighted South Korea's economic prosperity in hopes of inspiring North Korean people to resist the leadership in Pyongyang. 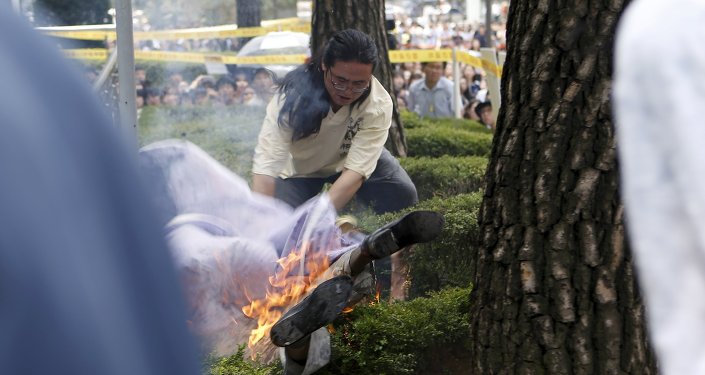 Such leaflet launches are "an open declaration of a war" against North Korea, the North said in the same statement. Last year, North Korea opened fire on balloons activist launched from border towns.

One South Korean activist told the Associated Press that he launched balloons carrying thousands of DVDs of "The Interview," a movie depicting a plot to assassinate North Korean leader Kim Jong Un.

The South Korean government recently urged activists to refrain from flying propaganda balloons into North Korea, saying such activities could worsen relations between the countries and put villagers in South Korean border towns at risk, the AP reported.

The pamphlets also blamed Pyongyang for a mine attack that maimed two members of a South Korean army border patrol earlier this month.

South Korea vowed the North would pay a "harsh price" for the attack and this week resumed – after a decade-long break – using loudspeakers along the border to broadcast propaganda messages into the North, Reuters reported.

The North denied it was behind the mine blasts, saying South Korean accusations that its soldiers had snuck across the border and planted the mines along a known patrol route were "absurd."

"If our army really needed to achieve a military purpose, we would have used strong firearms, not three mines," the commission said in a statement carried by KCNA.