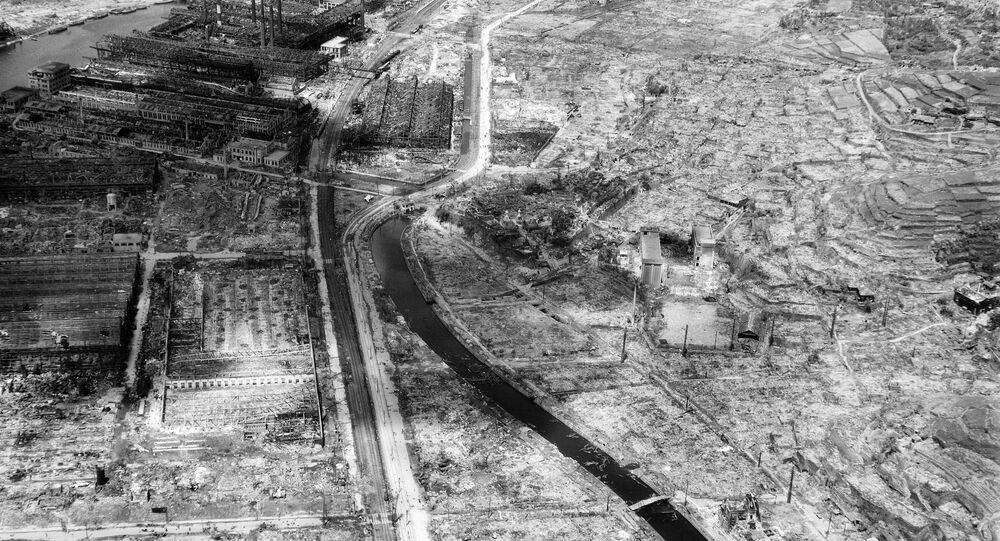 On this day 70 years ago, on August 9, 1945, the Japanese city of Nagasaki was targeted by an atomic bombing.

© REUTERS / Toru Hanai
Nagasaki Mayor Calls on Nuclear Powers to 'Come and See' Nuclear Explosion Outcome
MOSCOW (Sputnik) — The city of Nagasaki is located in western Kyushu, Japan, and is the capital of Nagasaki Prefecture. It started as a local fishermen’s town that eventually grew into a sprawling city. During the self-imposed isolation of Japan, Nagasaki was the only port to handle limited trade with the Netherlands and China.

After World War II broke out, Nagasaki retained its status as a major seaport and became a very important military installation with many production facilities, primarily shipyards, weapons and steel-smelting plants.

Nagasaki is located in two valleys through which two rivers flow. A mountain range divides the residential and industrial districts and resulted in the city’s chaotic development. Its buildings were located on an area of less than four square miles at a time when the entire city covered 35 square miles.

For many years, Nagasaki expanded without an urban development plan. That is why residential and factory buildings were located as close as possible to each other throughout the entire industrial valley. The Mitsubishi Steel and Arms Works, the Mitsubishi Electric Shipyards and the Mitsubishi-Urakami Ordnance Works were located on the south and north sides of the same street.

© AFP 2020 /
WWII 'Did Not Justify' Hiroshima, Nagasaki Atomic Bombings by US
The city’s main business and residential districts were in a small valley near the edge of the harbor. Nagasaki had never been subjected to large-scale airstrikes prior to the atomic bombing. On August 1, 1945, several high explosive bombs were dropped on the city. Some of them hit the shipyard and docks in the city’s southwestern district. Several more bombs damaged the Mitsubishi Steel and Arms Works, the local medical school and hospital.

Although the air raid caused insignificant damage, many people in the city were worried, and some of them, mostly students, were evacuated to rural areas. The overall population decreased somewhat prior to the dropping of the atomic bomb.

The atomic bomb Fat Man with a plutonium core (using plutonium-239), dropped on Nagasaki, weighed 4.5 metric tons and had a yield of 20 kilotons. The United States had planned to drop the bomb on August 11, but the deadline was moved up to August 9.

At 11:02 a.m. local time, on August 9, the crew of the bomber Bock's Car dropped the Fat Man bomb on Nagasaki. The bomb exploded high above the city’s industrial valley, almost halfway between the two main targets – the Mitsubishi Steel and Arms Works to the south and the Mitsubishi-Urakami Ordnance Works to the north.

© AP Photo /
Atomic ‘Hibakusha’: 70 Years in the Life of Hiroshima Survivor
Over 73,000 people were either killed or listed as missing, and 35,000 more died later from radiation disease and from wounds. Over 50 percent of atomic-blast victims suffered from burns, and up to 30 percent were affected by the blast wave. An additional 20 percent were subjected to penetrating radiation. Fires destroyed most of the residential buildings.

The atomic explosion over Nagasaki affected an area of about 43 square miles, including 8.5 square miles of water surface and 9.8 square miles covered by buildings. The remaining areas were sparsely populated, and this helped avoid even greater casualties.

The second nuclear strike in history proved just as devastating as the first one. An official Japanese report assessing the results of the attack in Nagasaki described the city as a cemetery where no gravestone remained intact.

© Flickr / Center for American Progress Action Fund
Hiroshima Anniversary Signifies Importance of Iran Nuclear Accord - Kerry
Today, the ground zero area is located in a prosperous Nagasaki suburb. Hypocenter at the Nagasaki Peace Park is the only reminder of the tragedy. A black stone column in the center of the park marks the location above which the bomb detonated.

The central section of the Nagasaki Peace Park features a colossal figure of a sitting half-naked man called the Peace Statue. His right hand points to the sky, as if showing the falling bomb, and the left hand extends horizontally, symbolizing peace and forgiveness.

The Atomic Bomb Museum has been located in the Peace Park’s south sector since 1996. The museum’s exhibits make a poignant impression on visitors. A clock with its hands frozen at 11:02, the exact time of the August 9, 1945 atomic blast, has become a symbol of Nagasaki.