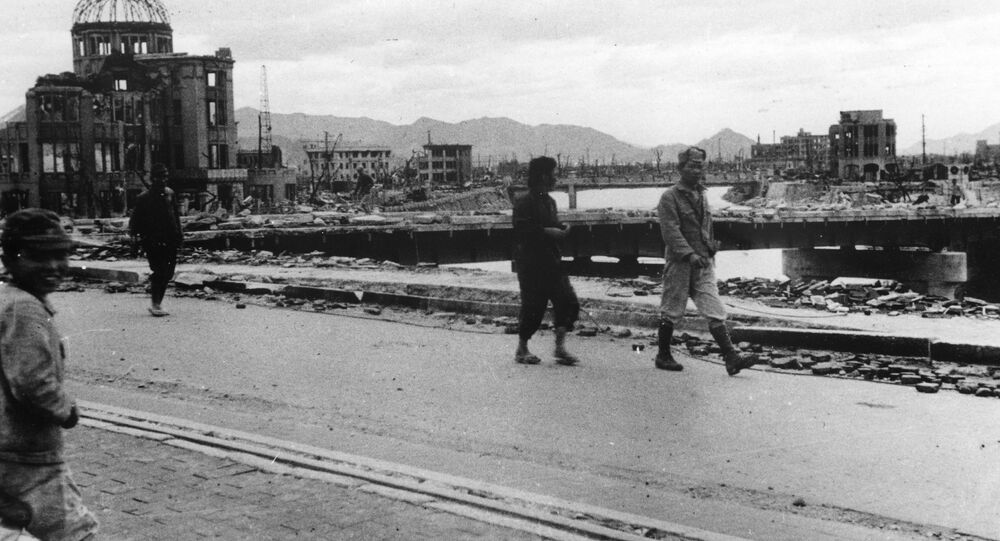 Should the US Apologize for Hiroshima and Nagasaki?

Seventy years after the United States dropped two atomic bombs on Hiroshima and Nagasaki, Washington has yet to apologize to the Japanese people for the hundreds of thousands of their countrymen who perished in the world’s first-ever nuclear strikes in August 1945.

But should the Americans apologize for what they did seventy years ago? Sputnik discussed the matter with well-known Japanese blogger and journalist Shuntaro Torigoe.

“The atomic bomb dropped on Hiroshima killed 150,000 people and 70,000 more died in the second atomic bombing of Nagasaki. Many, many more later died from radiation, but I think that  killing 150,000 with a single bomb can already be described as mass murder and a crime against humanity,” Shuntaro Torigoe said.

“The Americans did to the Japanese what the Germans did to the Jews at Auschwitz. In a war, people always kill each other, but in Hiroshima they instantly killed 150,000, including women, children and unarmed seniors who were not combatants… This is a crime against humanity, against everything that is fair and as such, it begs for an apology…”

© AP Photo / Shizuo Kambayashi
US Apology for Hiroshima, Nagasaki War Crimes 'Long Overdue'
“During the war,” he said, “Japan was defeated by the Americans and it was Japan, not America, which was tried by the Tokyo Tribunal. Then there was the Cold War between the US and the Soviet Union and the Soviets built their own nuclear bomb, and we could no longer blame the Americans [for dropping the bombs on Hiroshima and Nagasaki].”

“The Americans argue they dropped the bombs to end the war unleashed by Japan’s attack on Pearl Harbor, and thus spare the lives of tens of thousands of Japanese and American soldiers. The US government and ordinary Americans believe the use of atomic weapons against Japan was justified, but even though the Japanese did a lot of bad things, including to the Chinese, we never committed an atrocity like that. Japan was the only country around to see 150,000 of its people, none of whom on the battlefield, annihilated by a single blast.”

“The perpetrators of such a crime must be brought before the international tribunal in The Hague, but we haven’t heard any official apology either from the US government or the American people. This is not right.”

© AP Photo /
Atomic ‘Hibakusha’: 70 Years in the Life of Hiroshima Survivor
In 2009 President  Barack Obama reportedly wanted to attend a commemorative ceremony in Hiroshima and offer a formal apology to the Japanese people, only to be asked by Tokyo not to because they feared this would play into the hands of those who are against Japan’s military cooperation with Washington.

When asked if the Japanese government really needed a US apology, Shuntaro Torigoe said:

“I never heard about President Obama saying he wanted to apologize. I think this whole thing is just hearsay… No American President has ever apologized to the Japanese people for the atomic bombings of Hiroshima and Nagasaki. I think the American people would not like that. They believe that dropping the bombs was the right thing to do, an act of justice. If the American President went to Japan and said he was sorry he would face a very bad backlash back home… That’s why I think President Obama never said anything like that,” Shuntaro Torigoe added.

When asked if the United States should apologize for dropping the atomic bombs on Hiroshima and Nagasaki, and also about the true reason for Washington’s decision to use nuclear weapons against civilians, Woo Kuang-Hien, a prominent Vietnamese historian, said.

“The atomic bombings of Japanese cities that killed hundreds of thousands people, most of them innocent civilians, was a heinous crime the American authorities must apologize for. And not only to the Japanese people, but to the whole mankind, because the Americans were the first to build and use a nuclear weapon. This led to the nuclear arms race which turned the planet into one big powder keg ready to explode any moment. I believe that the US must do more than just apologize, it must lead a worldwide campaign for comprehensive nuclear disarmament.”

“The Americans argue that the atomic destruction of Hiroshima and Nagasaki helped end the war and force the Japanese to surrender. The main reason for Japan’s surrender, however, was the routing of their million-strong Kwantung army by the Soviet Union, which honored its commitment to the Allies to enter the war against Japan after defeating Nazi Germany.The Americans wanted to drop the bombs on Hiroshima and Nagasaki to test their deadly new weapon and to intimidate the Soviet Union at the start of the Cold War,” he continued.

He went on to say, “The Americans owe an apology also to the Vietnamese, because their use of Dioxin during the Vietnam War poisoned nearly six million people and affected several generations of Vietnamese… The Americans never apologized for that. They should learn from the South Koreans government, which did apologize to the Vietnamese for the atrocities its soldiers committed during the Resistance War of 1965-1968.

Seoul has since contributed very heavily into the development of the affected areas of Central Vietnam.”