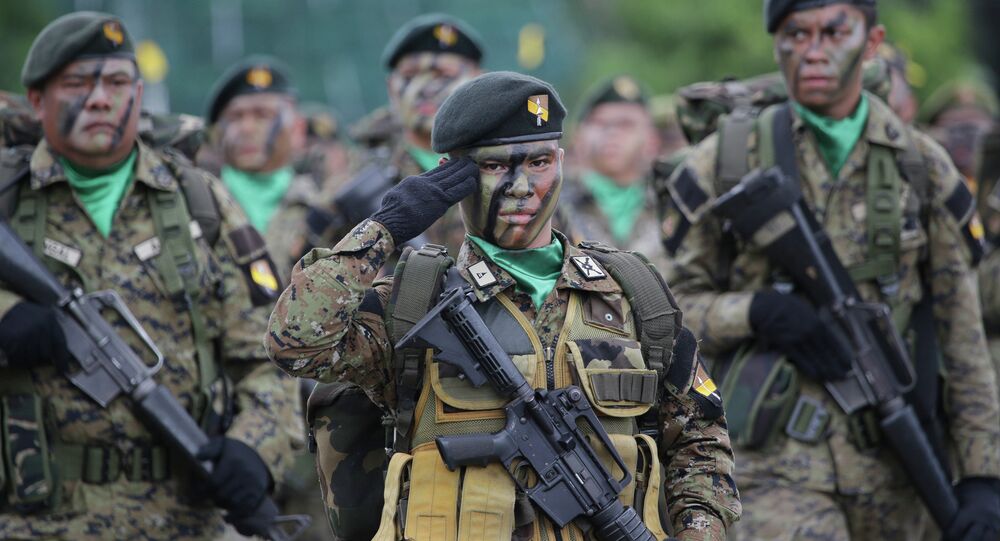 © AP Photo / Ritchie B. Tongo/Pool
Filipino Warship ‘Reinforcement’ on Chinese Isle Angers Beijing
According to Custodio, while China is building new bases in the South China Sea, the Philippines' military modernization program has made  little if any headway.

A few years ago, Philippine President Benigno Aquino III pledged to restore the country's military capability which was undermined by protracted underinvestment. The President vowed to spend almost $1.7 billion on new equipment.

Surprisingly, although the Philippines Congress had passed the law approving $2 billion for defense procurement in 2013, the bill has not yet been signed by the President.

© AP Photo / Aaron Favila
Google Maps Removes Chinese Name for Disputed South China Sea Territory
The delay can be explained by the fact that the country faced significant financial losses in 2013 due to the super-typhoon Haiyan. The government had to spend billions on reconstruction following the natural disaster. On the other hand, it has recently been revealed that a number of senior Philippine officials have been involved in corruption schemes.

In light of this, the only chance for the Philippines to upgrade its relic weaponry is to obtain secondhand equipment from allies such as Tokyo and Washington, according to experts.

However, the necessity for the Philippines' military buildup is not entirely due to the perceived threat from China.

"It is wrong to think about military modernization as solely being directed at China," Washington D.C.-based expert in Asian security affairs Prashanth Parameswaran stressed.

"The Philippines faces a range of internal and external challenges — including insurgencies, natural disasters, unresolved territorial and sovereignty issues with neighboring states, and a significant lag when it comes to keeping up with the Joneses in Asia more generally," Parameswaran underscored.

© AP Photo / Andy Wong
Teasing the Dragon: Why Washington Unleashes Battle of Nerves With China?
The point is that the Philippines still remains one of Asia's weakest militaries and it should build its military power from a "very low base," the expert noted.

Although there is a consensus about the idea that the country should beef up its military capabilities, this goal is dependent on the Philippines' financial circumstances. Since the country's economy has been doing relatively well, the outgoing Aquino administration hails the idea of military modernization.

However, there is no guarantee that the future government will be committed to the same concept and will shield the defense sector from cuts, according to Parameswaran.