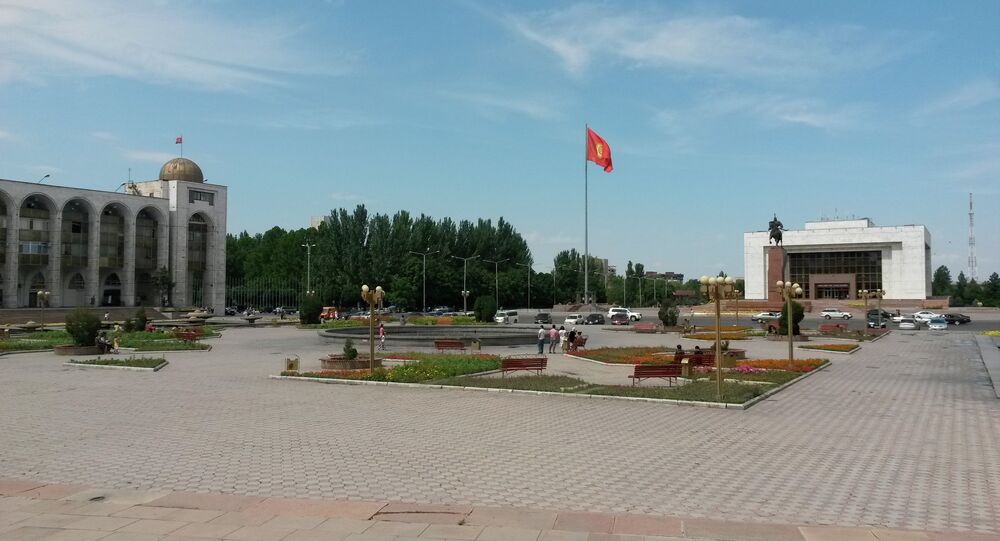 Exasperated by the US State Department's decision to grant a human rights award to a local protest organizer convicted of organizing deadly ethnic clashes five years ago, Kyrgyz authorities have announced their intention to denounce a 1993 Kyrgyz-US cooperation agreement.

YouTube / Inform Agency 24.kg
Scandal in Kyrgyzstan After Protest Organizer Seen With US Diplomat
Kyrgyzstan's Foreign Ministry issued a note of protest to US Charge d'Affaires Richard Miles on Friday, a day after the State Department's decision to grant its 2014 'Human Rights Defender Award' to Azimjon Askarov.

A former civic organizer of the country's ethnic Uzbek minority, Askarov has been serving a life sentence since 2011 after being convicted for his role in organizing a series of deadly ethnic clashes between Kyrgyz and Uzbeks in June 2010 in the Kyrgyzstan's southern regions of Osh and Jalal-Abad.

Over 400 people were killed and tens of thousands more displaced by the unrest, which Kyrgyz authorities, including President Almazbek Atambayev, have suggested was instigated by forces loyal to then-recently ousted pro-US President Kurmanbek Bakiyev, who had come to power in 2005 following the events of the so-called 'Tulip Revolution'.

A release published on the website of the Kyrgyz Cabinet of Ministers on Friday noted that in connection with the US decision to honor Askarov, Bishkek intends "to unilaterally denounce the Agreement between the Government of the Kyrgyz Republic and the United States Regarding Cooperation to Facilitate the Provision of Assistance, signed on May 19, 1993 in Washington."

The 1993 agreement had provided for US aid to the country to be brought into and out of the country without the levying of taxes and customs duties. Moreover, US personnel located on Kyrgyz territory in connection with the aid programs were granted near-diplomatic status.

The Cabinet of Ministers' statement noted that Askarov was justifiably sentenced for his role in "inciting ethnic hatred, organizing mass disorder and for his complicity in the brutal murder of a law enforcement officer in the course of the tragic events of June 2010." It emphasized that "the court's decision was made on the basis of irrefutable evidence, and that "Askarov's guilt has been proven at all judicial instances. In this context," the release noted, "awarding a man convicted for such serious crimes is cause for extreme surprise and deep concern."

© Sputnik / Vladimir Pirogov
US Envoy Congratulates Kyrgyzstan with WWII Victory, Fails to Mention USSR
The Ministry of Foreign Affairs and the Parliament had earlier noted that the State Department's decision has "seriously damaged the bilateral relations between the Kyrgyz Republic and the United States," adding that US actions are "unacceptable and contrary to the letter and spirit of the bilateral agreements on cooperation and support."

The US State Department had announced earlier this week that it would present the human rights award to Askarov's son, Sherzod, on his father's behalf.