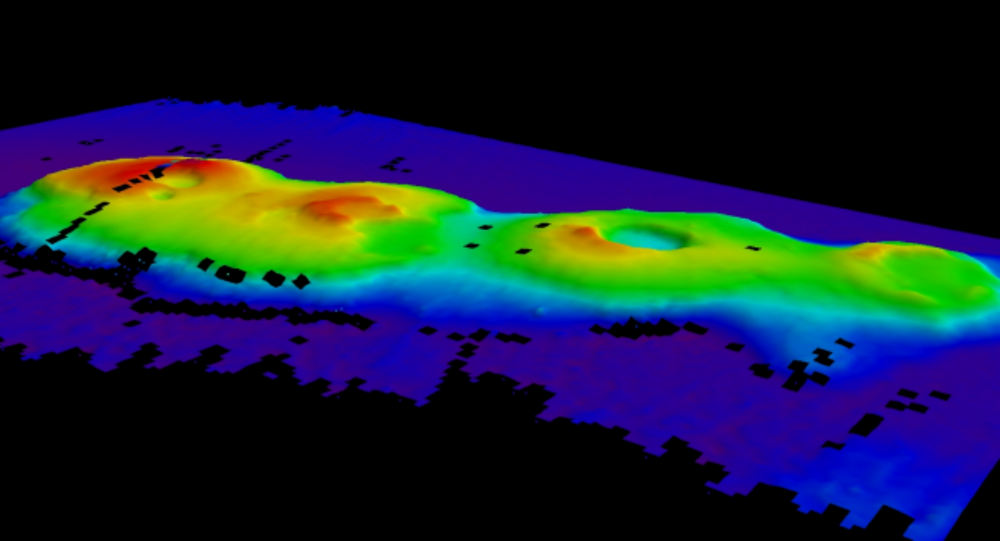 A new state-of-the-art research vessel off the coast of Australia has just uncovered a cluster of long-dead volcanoes hidden deep under the ocean’s surface - just 155 miles from Sydney.

Australia’s Marine National Facility’s newest vessel — the Investigator — concluded its first research voyage on June 18. Three hundred and eight feet long, it was developed to help oceanographers and geoscientists explore and examine the deepest and darkest parts of Australia’s seafloor, much of which remains a mystery.

Its first-of-its-kind maiden research voyage involved 28 scientists from the University of New South Wales, the University of British Columbia, and the University of Sydney, among others. The purpose of the voyage was to search for nursery grounds for larval lobsters, but using the vessel’s revolutionary multi-beam sonar arm, scientists came across something much more interesting: a cluster of four volcanoes deep under the ocean’s surface.

With cauldron-like features, the volcanoes are known as calderas, the Spanish word for "cooking pot." They were formed after an eruption that collapsed the land around them roughly 50 million years ago. The largest of the four has an almost mile-long rim and rises half a mile from the seafloor.

The cluster is 12 miles long and 3.7 miles wide, covering a large of the ocean’s seabed three miles down.

Professor Richard Arculus, a petrologist and leading expert on volcanoes from the Research School of Sciences, believes the massive size of the caldera was created by what was likely a massive eruption.

"But there’s no real chance [they] are going to erupt again," he noted. "These guys have been dead for a long time."

Arculus also said the discovery of the volcanoes would not have been possible if not for the Investigator because of how deep under the ocean they are nestled.

"They haven’t been found before because the sonar on the previous Marine national Facility research vessel, Southern Surveyor, could only map the seafloor to 3,000 meters (1.9 miles), which left half of Australia’s ocean territory out of reach."

"It proves yet again that we know more about the topography of Mars than we do the sea bed in our own backyard," he added.

According to the Commonwealth Scientific and Industrial Research Organization, only a small portion of the seafloor around Australia — a mere 12% — has been successfully mapped, leaving the vast majority of the surrounding marine territory undiscovered.

The newly discovered volcanoes will present a new opportunity for Australian scientists to discover not just the origins of their surrounding ocean topography and origins, but also that of the Earth’s surface more generally.

"They’ll tell us part of the story of how New Zealand and Australia separates around 40 to 80 million years ago, and they’ll now help scientists target future exploration of the seafloor to unlock the secrets of the Earth’s crust," Arculus said. "It could provide information about why the east of Australia stands high, and about the nature of the country’s mineral deposits, which always drives curiosity."

Marine biologist and chief scientist of the Investigator Iain Suthers echoed Arculus’ excitement, referring to the voyage as an "enormously successful" test of the new research vessel and its potential in uncovering the deeper mysteries of the ocean.

"This is the first time we’ve been able to respond directly to the changing dynamics of the ocean," he said. "For a biological oceanographer, it doesn’t get more thrilling."