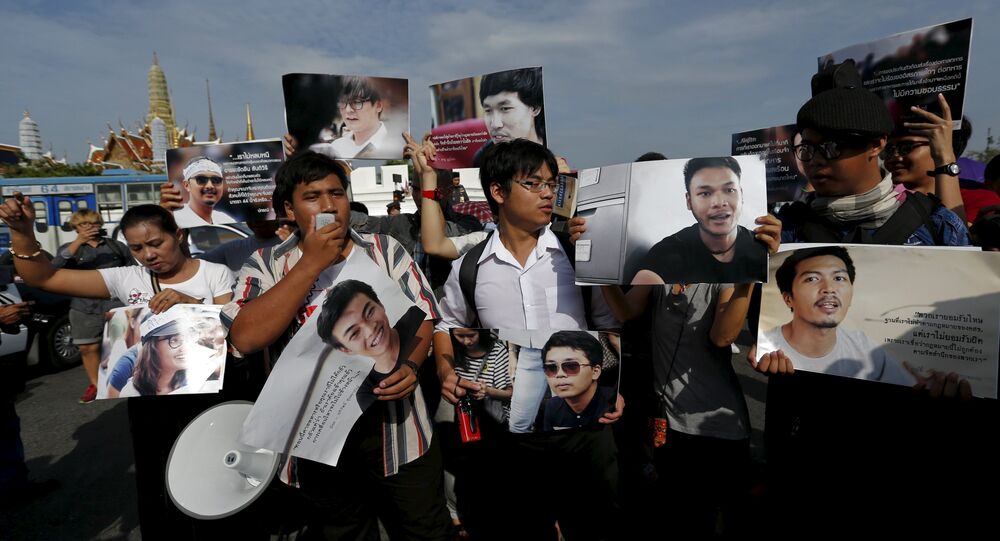 Thai special services reportedly informed the prime minister of a US organization that might have backed New Democracy Movement protests in the country.

© AP Photo / Achmad Ibrahim, File
Thai Police on Alert After Probe Launched on Opposition Leader
BANGKOK (Sputnik) — Thai intelligence suspects a US organization of having supported protests by the New Democracy Movement (NDM) that started in May, the Bangkok Post reported Wednesday, citing a government source.

The name of the US organization was not revealed.

According to the source, Thai special services informed Prime Minister Prayut Chan-o-cha of their suspicions. The prime minister reportedly declined to comment on the matter.

A spokeswoman for the US Embassy in Thailand, Melissa Sweeney, said on Wednesday that the United States does not take sides in Thai politics.

© AP Photo / S. Yulinnas, File
Thailand Tells American Aircraft to Leave as US Tries to Reach Rohingya Migrants
A political crisis erupted in Thailand in 2013, with mass protests being staged against the government of former Prime Minister Yingluck Shinawatra.

Martial law was introduced in the country following the May 22, 2014 military coup in Thailand.

The NDM started to organize regular street rallies in May 2015, gathering dozens of students in the largest anti-regime protests in Thailand since the coup.

On Wednesday morning, 14 student activists were released from Bangkok Remand Prison, where they had been held for almost two weeks for staging protests in defiance of a ban on public gatherings. However, the charges against them have not been dropped.

Thai Authorities to Stamp Out 'Provocative Questions' From Reporters