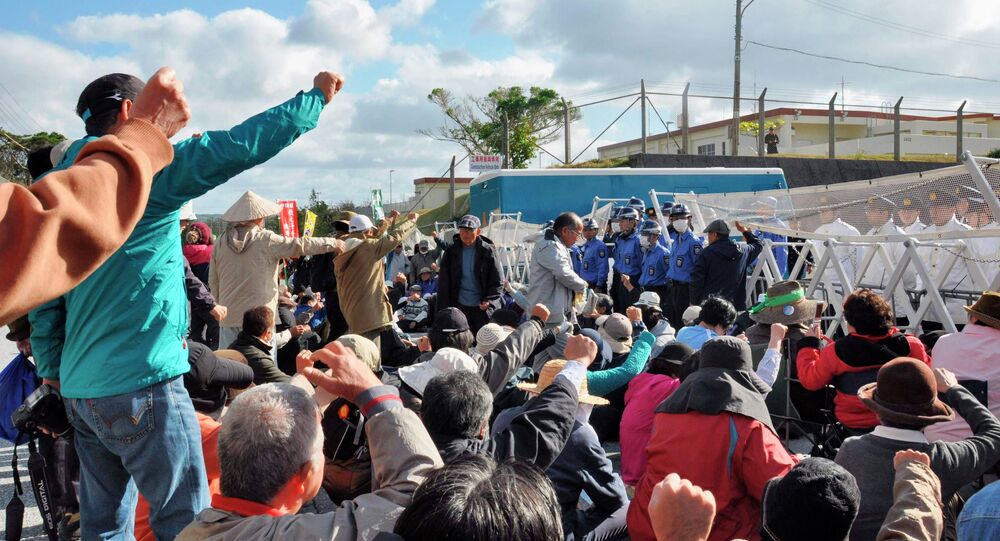 Okinawa's governor Takeshi Onaga has reiterated that he is against a US military installation in the prefecture during his first talks with US Ambassador to Japan Caroline Kennedy, Keyodo news agency reported.

Gov. Onaga tells US Ambassador Kennedy directly that the people of Okinawa reject the construction of US Marine airbase at Henoko.

In 2006, Japanese authorities gave the green light to US plans to relocate one of the largest American bases in the prefecture to a remote area of the island.

The governor, elected last year on the anti-base platform, and the majority of Okinawans are strongly against the move and continue to fight for a future without US troops on the island.

© REUTERS / Kyodo
Okinawa Fights for Future Without US Military Bases
Despite these efforts, the US and Japan confirmed that they were still committed to relocating US Marine Corps Air Station Futenma to the less populated Henoko district in Nago earlier in June.

Over 70 percent of US military bases in Japan and approximately half of the 47,000 US troops deployed to the country are located in Okinawa.
The US forces in the prefecture have been mired in scandals, ranging from deadly accidents to crimes. The gang-rape of a 12-year-old Japanese girl by three US servicemen in 1995 is a particular case in point.

"Okinawa: 7 US Marines arrested in 8 days" — No wonder most Okinawans don't want new Marine base built on island. https://t.co/ZpgGQ98gPO

"The will of Okinawans is to prevent the construction of the base in Henoko," Onaga told Kennedy.

That warm, fuzzy feeling you get from having yet another military base forced down your throat. #HenokoNow #Okinawa pic.twitter.com/F22ukydH7V

The governor tried to convince US officials to abandon the controversial relocation plans during his May 27 – June 5 visit to the US. Tokyo and Washington insist that relocating Futenma is the only solution.

In #Okinawa I heard specific requests for @greenpeaceusa to help protect #biodiversity at Oura Bay & #Henoko from a new military base.

Okinawa Governor Vows to Stop Relocation of US Base Within Prefecture

US to Continue Construction of US Military Base in Okinawa