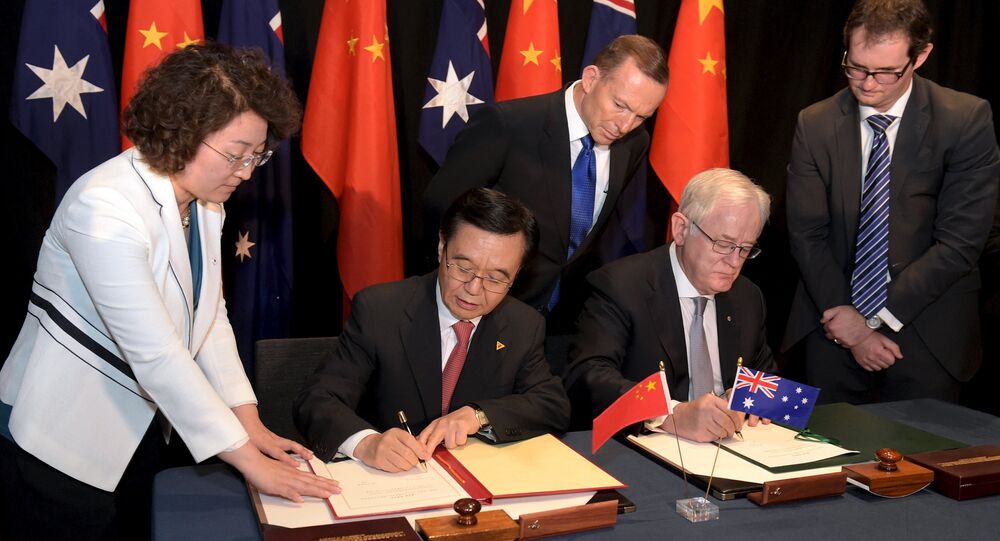 © AFP 2020 / WILLIAM WEST
Australia Extensively Violates Fundamental Freedoms Through Laws
A landmark bilateral free trade agreement was inked by Australian and Chinese officials, in what signified the end of difficult and protracted talks, according to media reports.

Announcing the agreement on Wednesday, Australian Prime Minister Tony Abbott touted it as something that he said "will give our nations unprecedented access to each other's markets."

The document was formally signed in Canberra by Australian Trade Minister Andrew Robb and visiting Chinese Commerce Minister Gao, who called the signing of the agreement "a milestone in bilateral relations."

He was echoed by Robb, who said that "the landmark agreement will lock in our existing trade relationship with our largest trading partner, and will be a catalyst for future growth across goods, services and investment."

The deal stipulates abolishing duties on almost all Australian resources and energy products; it means that more than 85 percent of Australian goods entering China will carry no such penalties.

As for Australia, it will in return remove the five percent tariff on Chinese electronics and home appliances.

Greenwald: Australia Surveillance Program One of World’s Most Aggressive