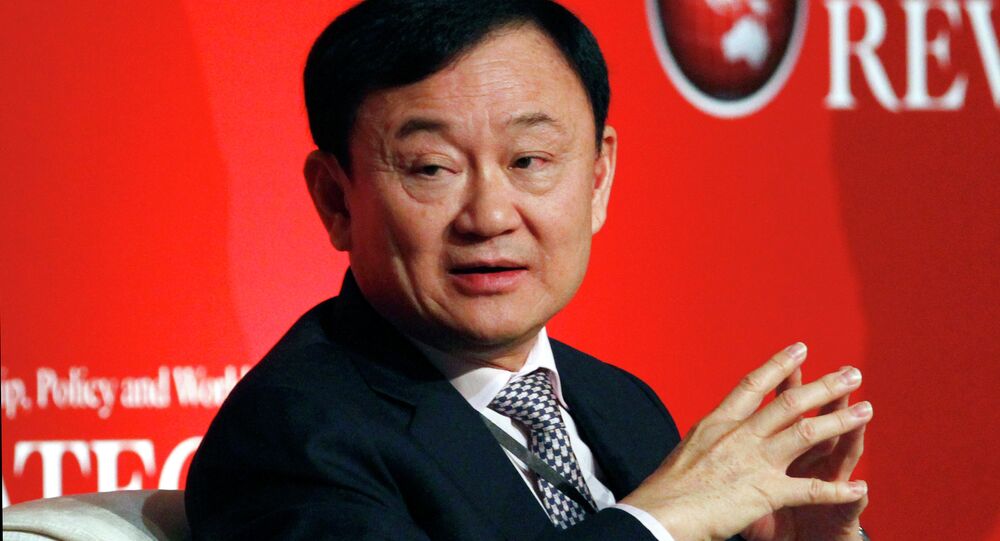 Thai Police on Alert After Probe Launched on Opposition Leader

Security measures were stiffened in Thailand amid the ongoing investigation by ruling military junta against the exiled former prime minister and opposition leader, Thaksin Shinawatra.

The Thai military government lunched a probe against Thaksin on Tuesday for insulting the monarchy after his recent interview in Seoul in which he claimed that Thai privy counsellors, advisers to the monarch of Thailand, stood behind the 2014 military coup.

Under Thailand’s defamation law, anyone convicted of insulting the king, queen, heir or regent faces up to 15 years in prison on each count.

The order from national police chief Pol. Gen. Somyot Pumpunmuang, circulated to all units on Friday, directed officers to monitor supporters of the former prime minister and strengthen security measures in the country amid fears of civil disobedience or armed violence, according to Bangkok Post.

© AFP 2020 / Pairoj
Thai King Authorizes Lifting of Martial Law
Thailand has seen a severe political crisis since 2011, when then-Prime Minister Yingluck Shinawatra and Thaksin's sister resigned following months of mass anti-government protests in the country that eventually led to a coup in May 2014.

The critics of the former prime minster say her policies were strongly influenced by her older brother, Thaksin, who was ousted in a military coup in 2006 and fled the country shortly before a court sentenced him to two years in jail for corruption in 2008.

Following the May 22, 2014 military coup in Thailand Gen. Prayuth Chan-ocha, the current prime minister, introduced martial law in the country. In the days that followed the coup, military authorities announced they were targeting national reconciliation and new elections.