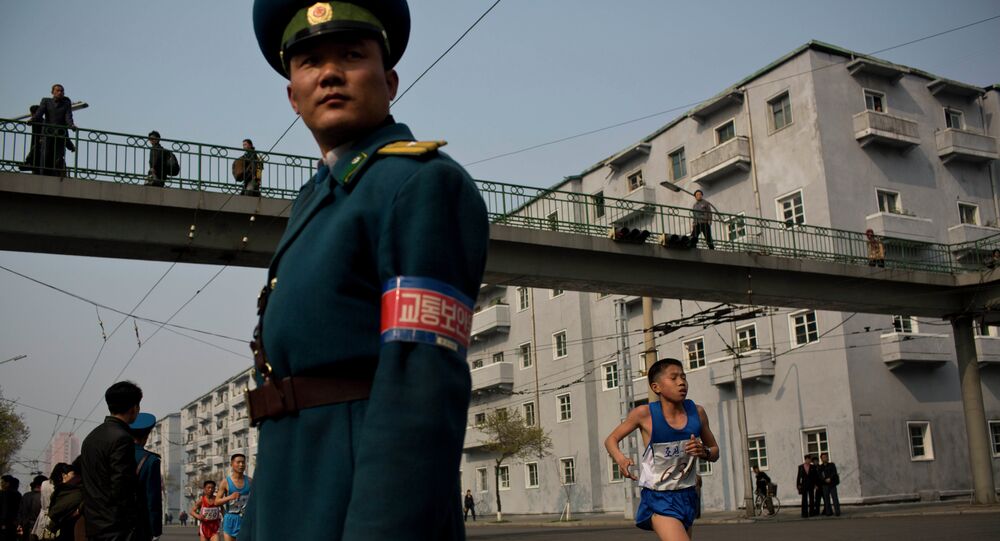 Pyongyang's membership in the China-led Asian Infrastructure Investment Bank (AIIB) may facilitate the resolution of North Korea's political and security issues as well as boosting the country's economic growth, a US expert noted.

According to Bradley Babson, a former vice president of the World Bank and expert in North Korea's economy, the AIIB may play crucial role in resolving Pyongyang's nuclear standoff and open doors for multilateral dialogue between the Democratic People's Republic of Korea (DPRK) and other nations.

"North Korea potentially stands to benefit if the [AIIB] bank's forthcoming membership requirements allow Pyongyang a path to participation and if the government can someday clear transparency and other administrative hurdles," the expert stressed.

© AP Photo / Jung Yeon-je, Pool
Pyongyang Repeats Request for Inter-Korean Probe Into Cheonan Sinking
The expert emphasized that it is unlikely that Pyongyang would receive easy access to the bank. Mr. Babson noted that the DPRK has reportedly made an informal enquiry about becoming an AIIB member, "and came away discouraged because it could not provide key information on its economic and financial conditions."

On the other hand, "the overhanging shadow of North Korea's nuclear program" may also pose political obstacles to North Korea's membership in the AIIB, the expert noted.

© AP Photo / Lee Jin-man
China Warns of ‘Instability and Uncertainty’ on Korean Peninsula
According to Mr. Babson, like the International Monetary Fund (IMF), World Bank and Asian Development Bank, the China-led AIIB will need comprehensive information regarding economic condition of its would-be member in order to grant it voting powers and specify its financial commitments in the organization.

Although providing such a detailed data will be "both a political and technical challenge" for Pyongyang, the expert believes, that North Korea can be motivated to alter its longstanding financial practices in exchange for future economic advantages.

"A gradual, phased approach could begin by according North Korea an observer status within the AIIB. Such a step would allow North Korea to learn how the AIIB conducts normal business and why the bank adopts certain governance policies and operational procedures," the expert stressed.

Eventually, "membership and access to loan financing would come when North Korea satisfies all of the necessary technical and political conditions for AIIB membership," he added.

Furthermore, if the nation significantly reduces its threat to the global nonproliferation regime and regional security, North Korea's prospective membership in the IMF, World Bank and Asian Development Bank should be taken into consideration, the expert remarked.

A careful international strategy may use the AIIB as a new instrument for "productive engagement" with Pyongyang, Mr. Babson underscored.

"By helping Pyongyang to fund infrastructure that it badly needs for economic growth, the bank could help advance discussions in political talks on security issues—not just on nuclear issues but also in creating a multilateral framework for Northeast Asia—and potentially through creating greater economic interdependence with other state participants in AIIB programs," Bradley Babson elaborated.

According to Babson, regardless of the fact that Washington and Tokyo refused to join the AIIB as founding members, both the US and Japan should "seriously consider welcoming" Pyongyang's initiative to join the AIIB. The AIIB, in its turn, should force Pyongyang take concrete steps addressing international concerns about its nuclear and missile programs, the expert emphasized.

US Troops Ready to ‘Fight Tonight’ in Korea - General

Was South Korea Wrong About the Execution of N. Korean Defense Minister?