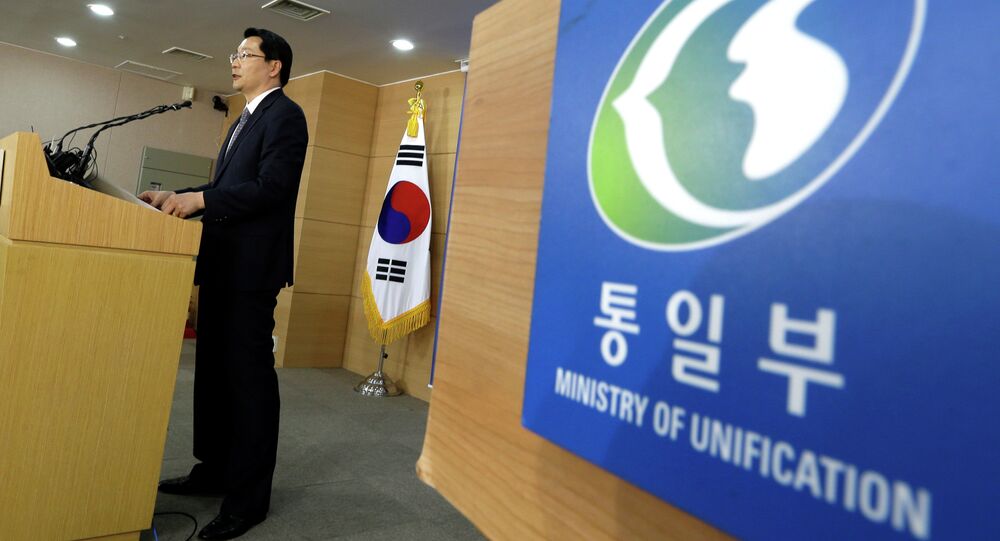 South Korea added a new layer of conditions to the lifting of sanctions after North Korea proposed to investigate the incident which led South Korea to instigate the sanctions.

South Korea added new conditions to the lifting of its sanctions against North Korea, Seoul's Ministry of Unification said in a statement on Sunday.

South Korea's government previously said that it refuses to lift its sanctions against North Korea unless it takes responsibility for a 2010 incident in which, according to Seoul, a torpedo sank a South Korean Navy ship.

South Korea blamed the North for the incident and enacted wide-ranging sanctions against it, which ended inter-Korean dialogue. North Korea considers the lifting of sanctions a precondition to holding inter-Korean talks and investigating the incident.

"South Korea is open to discussing various issues including the sanctions if the North responds to our proposal for inter-Korean talks," the statement said.

© AP Photo / Jung Yeon-je, Pool
Pyongyang Repeats Request for Inter-Korean Probe Into Cheonan Sinking
The ministry also stated that the government will not lift its sanctions unless North Korea takes responsibility for the incident, effectively adding a new layer of conditions to ending sanctions.

"The government's position has not changed that the North should take responsible actions regarding the Cheonan incident before lifting the measures," the statement added.

Cheong Seong-Chang, head researcher of unification issues at a leading South Korean foreign policy think tank told the Korea Times that the demand to assume responsibility for the sinking of the ship could itself torpedo inter-Korean talks.

"If the North admits its misdeeds and makes an apology, criticism in the South against Pyongyang will increase considerably, making it more difficult to improve South-North relations," Cheong told the Korea Times.

"We are trying to make person by person connections, so that there is understanding," American activist Gloria Steinem told AFP.

Earlier on Sunday, North Korea repeated its proposal to carry out an inter-Korean investigation into the sinking of the South Korean corvette Cheonan. North Korea also said that a relevant inspection team within its National Defense Commission has already been formed.