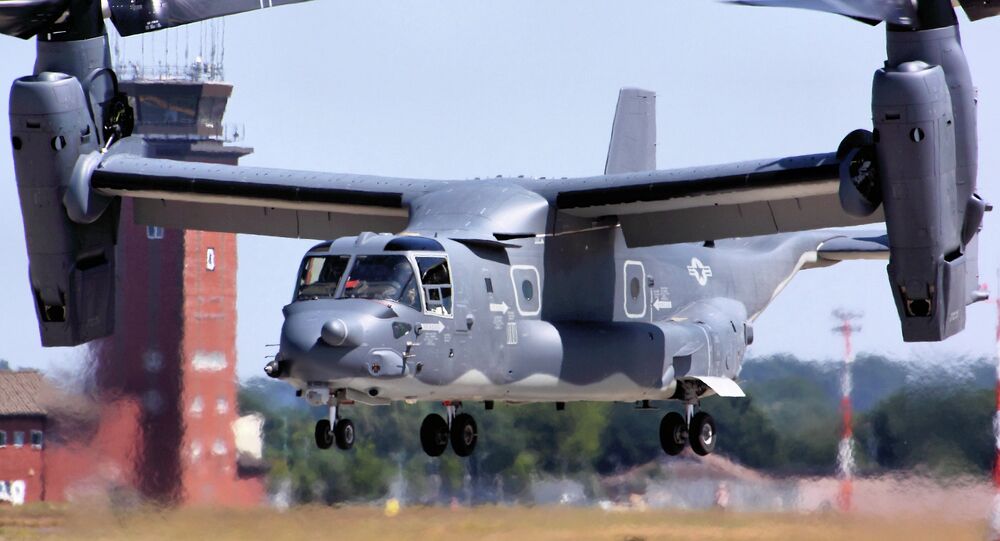 The Pentagon will go ahead with its planned deployment of Ospreys to Yokota Air Base in western Tokyo despite the deadly crash of one of the tilt-rotor aircraft in Hawaii, a spokesman said Monday.

© AP Photo / Maya Alleruzzo
Seoul Reportedly Plans to Buy US' Osprey V-22 Aircraft
One US Marine was killed and 21 were injured when an MV-22 Osprey crash-landed at Bellows Air Force Station on Oahu on Sunday during a training session.

The incident came just days after the Pentagon announced it would deploy a squadron of CV-22 Ospreys to Yokota base starting in 2017.

At a news conference, Pentagon spokesman Steve Warren said the accident will not affect the planned Yokota deployment and there are currently “no plans to adjust our flight operations in Japan” or elsewhere, The Japan Times reported.

Japan’s Defense Minister Gen Nakatani said, meanwhile, that he was seeking details from the US.

The crash — the latest in a string of fatal incidents surrounding the tilt-rotor aircraft since its development stage — has fueled fresh safety concerns in Japan.

Okinawa Governor Takeshi Onaga called for grounding flights in the prefecture, where 24 MV-22 Ospreys are stationed, until the cause of the crash is made clear, the newspaper report said.

The V-22 Osprey is a multirole combat aircraft utilizing tilt-rotor technology to combine the vertical performance of a helicopter with the speed and range of a fixed-wing aircraft.

With its rotors in the vertical position, it can take off, land and hover like a helicopter. Once airborne, it can convert to a turboprop airplane capable of high-speed and high-altitude flight.