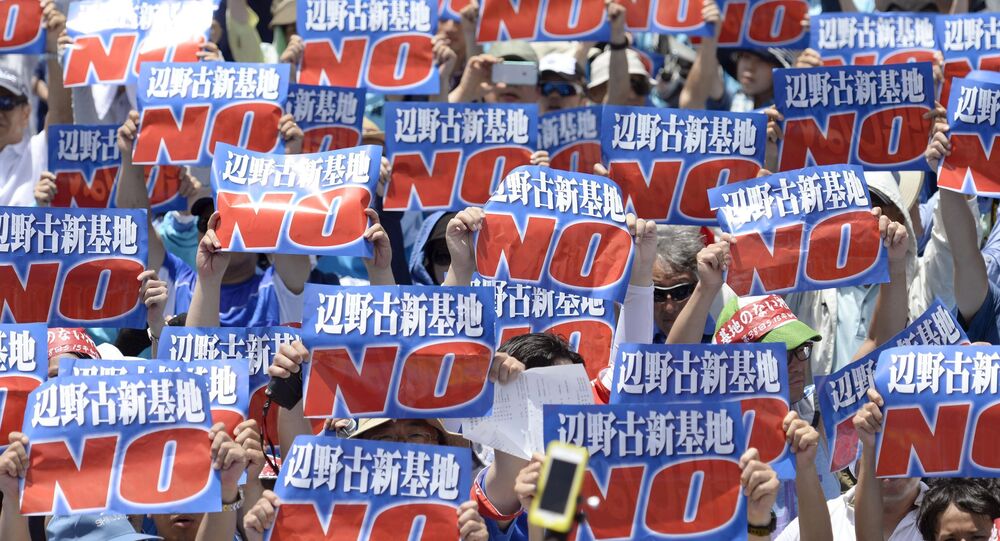 Tens of thousands rallied in Okinawa protesting against the US military's presence on the Japanese island as more locals agree that the prefecture has a bright economic future on its own.

all okinawa!! no more base, n i just hope the world peace:) pic.twitter.com/33Y9EvDIR5

35,000 gather in #Okinawa to reject a new US #military base at #Henoko. What part of "NO" don't you understand? #辺野古 pic.twitter.com/dSV7hdfacE

US military installations were once deemed essential for the local economy but for the last four decades their significance has been diminishing. They generated over 15 percent of prefecture income in 1972, when the United States returned Okinawa to Japan. In 2008, only 5 percent of local revenues came from the base.

© REUTERS / Kyodo
Okinawa Population Grows More Angry Over US Military Base in Region
Some sites that used to host US military installations were turned into shopping malls. One such place, known as the American Village, is often cited as a redevelopment success story. AEON Mall Okinawa Rycom, recently opened on the site once exclusively used by the US military personnel, is expected to become another one. Approximately half a million people visited the shopping mall in its first week.

Such success stories confirm what many Okinawans already know: "US military bases have become an impediment, rather than a benefit, to the growth of the prefecture's long-troubled economy," the Japan Times said.

Over 70 percent of US military bases in Japan and approximately half of the 47,000 US troops deployed to the country are located in Okinawa. The bases occupy approximately 20 percent of the island's territory.

© AP Photo / Eugene Hoshiko
Anime Legend Hayao Miyazaki Joins Fight Against US Okinawa Base
Moreover, the US forces in the prefecture have been mired in scandals, ranging from deadly accidents to crimes. The gang-rape of a 12-year-old Japanese girl by three US servicemen in 1995 is a case in point.

Locals increasingly believe this territory could be put to better use – as a tourist destination and a major freight hub in Asia.  Hence, Okinawa residents and local authorities have been against the relocation of one of the largest US bases in the prefecture to a remote area of the island. They want US Marine Corps Air Station Futenma gone completely.

Many Okinawa people are gathering to protest new US base in Henoko, Okinawa in Naha City now on 4.28… pic.twitter.com/pcTVf7TyAI

Although the future of the base remains in limbo, Japan's Prime Minister Shinzo Abe has repeatedly said that it was the only solution and the construction at the Henoko district in Nago would continue. However, local authorities remain unconvinced.

Okinawa's governor Takeshi Onaga is scheduled to arrive in the United States on a 10-day visit on May 27, according to Ryukyu Shimpo, a local newspaper. He plans to discuss the issue with the assistant secretaries of the US Department of Defense and the Department of State.

US Gives Back Okinawa Housing Area to Locals