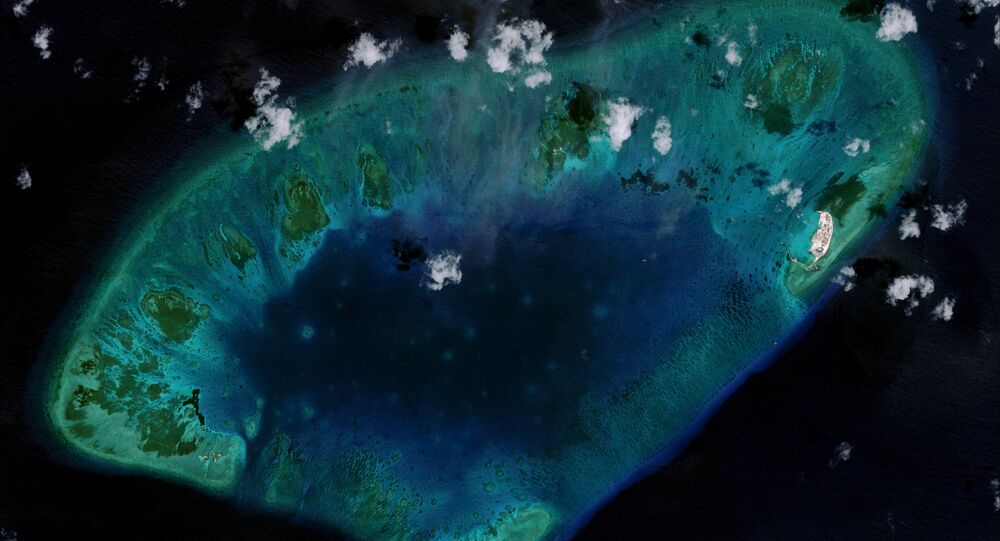 The pictures reveal land expansions at Sand Cay and West London Reef, both part of the Spratly Islands, one of the sea's major archipelagos comprising more than 30,000 islands and reefs.

Areas of the South China Sea, and particularly the Paracel Islands and Spratly Islands, are subject to competing territorial claims from a number of surrounding countries: China, Taiwan, Vietnam, Malaysia, Brunei, and the Philippines all make various claims to areas of the sea.

The largest territorial claim to the South China Sea comes from China, defined by the 'nine-dotted line' used to demarcate an area including the Paracels and Spratlys, known in Chinese as the Xisha Islands, and the Nansha Islands respectively.

© REUTERS / CSIS/Digital Globe
China Slams Philippines for 'Violating' South China Sea Code With 'Illegal Construction'
Vietnam and the Philippines also make territorial claims to the Spratly Islands, with the former claiming it has ruled over the Paracels and the Spratlys since the 17th century, and the latter basing its claim to the Spratlys on their close geographical proximity to the Philippines.

In its report accompanying the pictures, CSIS said,

"Between August 2011 and February 2015 significant upgrades were made to [the island of Sand Cay]," adding that its land mass had expanded from 41,690 to 62,970 square meters, and now boasted "defensive structures" such as trenches and gun emplacements placed there by the Vietnamese.

The revelation follow images released last month of China's land reclamation work in the South China Sea, which revealed the construction of transport facilities, including a runway, on Fiery Cross Reef in the Spratly Islands.

"China's work on the islands mostly serves civil purposes apart from meeting the needs of military defense. China is aiming to provide shelter, aid in navigation, weather forecasts and fishery assistance to ships of various countries passing through the sea," responded Xinhua in a commentary following the reports.

On Friday China's Foreign Ministry Spokesperson Hua Chunying commented on complaints from Philippine officials about Chinese construction on the islands, saying: "China's sovereignty over the Nansha Islands and their adjacent waters is fully supported by historical and jurisprudential evidence," and added that, in turn the construction by the Philippines of an airstrip on the island of Zhongye Dao is "illegal expansion and construction," on "islands and reefs grabbed by the Philippines."