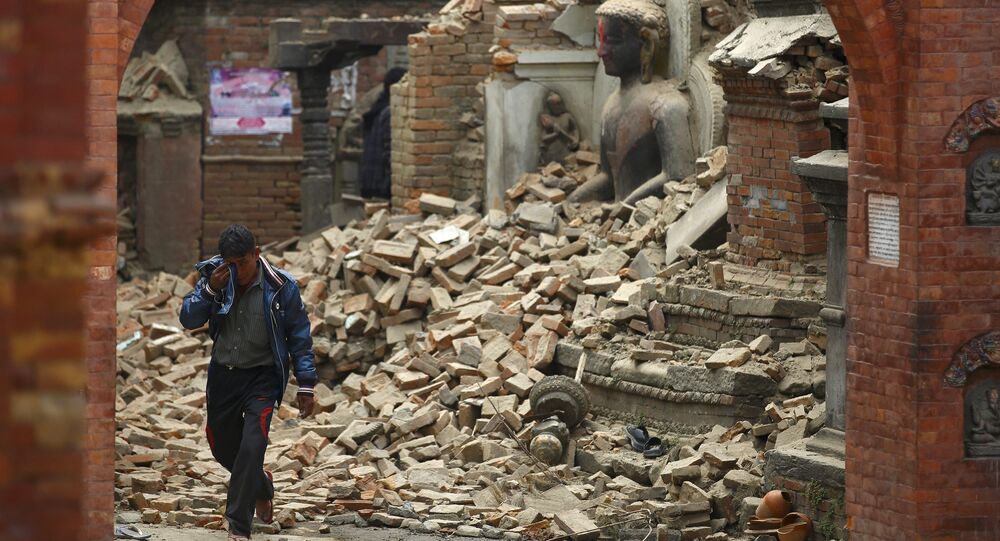 Numerous countries reached out to Nepal over the weekend, after a 7.8 magnitude earthquake reportedly killed more than 2,500 civilians.

MOSCOW (Sputnik) — On Sunday, Russian Emergencies Ministry announced that it was sending teams of rescuers, doctors and psychologists to assist the people of Nepal. More than 90 rescuers are currently preparing to leave for Nepal, with the ministry sending five special vehicles, the head of the task force Alexander Romanov said Sunday.

India has already contributed to humanitarian relief of Nepal, Foreign Secretary Subrahmanyam Jaishankar said Sunday. According to Jaishankar, India has already delivered blankets, water and food, and will send 13 extra aircraft with rescuers and aid. New Delhi has also sent several teams of rescuers, according to the country's Home Minister.

GoI has announced a compensation of Rs. 2 lakh to families of those who lost their lives in the Earthquake across parts of India.

© Sputnik / Olga Dadykina
Exclusive: Eyewitness Account of Tragedy in Nepal
According to local media's Sunday reports, Spain will be sending an aircraft with 30 tonnes (33 tons) of aid to Nepal Monday.

A team of experts is leaving Netherlands Sunday evening for Nepal to help search for the victims of the natural disaster, the country's Foreign Ministry said in a statement.

Pakistani Foreign Ministry also announced Sunday that it will be sending aid to Nepal, having sent two aircraft with paramedics, doctors and a search-and-rescue team. Islamabad has also delivered a 30-bed hospital, medicines, tents, water and food. Two more planes with relief assistance are due to arrive in Nepalese capital Kathmandu Monday.

According to local media's Sunday reports, Denmark will be sending five million kroner ($730,000) in emergency assistance to Nepal, with Development Minister Mogens Jensen saying that more aid was likely to follow.

According to China's Commerce Ministry, the country's government has allocated 20 million yuan ($3.2 million) in emergency humanitarian aid to Nepal. China will also send over tents, blankets, generators and other materials to the disaster-stricken country, the ministry announced Saturday.

"With the aim of comforting the dramatic situation, [Foreign] Minister [Paolo Gentiloni] has immediately ordered emergency aid in an amount of 300,000 euros," the Italian Foreign Ministry said in a statement Saturday. Rome is also ready to provide support in search and rescue operations in Nepal, according to the ministry.

On Saturday, US Secretary of State John Kerry said in a statement that Washington will be sending $1 million to Nepal, and is preparing to deploy disaster response and rescue teams.

Our thoughts & prayers go out to those affected by #NepalEarthquake. We're working closely w/gov't of Nepal to provide assistance & support.

According to the Israeli Foreign Ministry, the country's leader Benjamin Netanyahu agreed to send a rescue delegation with medical aid Saturday following a telephone conversation with Nepalese officials.

#NepalEarthquake Planes of Quatar, Israel and The Netherlands are on their way to Nepal with goods and rescue dogs.

"My thoughts are with the people of Nepal and everyone affected by the terrible loss of life and widespread damage caused by the earthquake. We are in close contact with the Nepalese government. The British Embassy in Nepal is offering our assistance to the authorities," UK Foreign Secretary Philip Hammond said in a statement Saturday.

Shocking news about the earthquake in Nepal — the UK will do all we can to help those caught up in it.

As many as 2,500 people were killed in the 7.8 magnitude earthquake which shook Nepal Saturday morning. The disaster occurred about 82 kilometers (51 miles) northwest of the capital Kathmandu, causing massive damage in the region. The area also experienced a powerful wave of aftershocks following the quake.

The disaster triggered avalanches on Mount Everest, as well as tremors in neighboring areas of India, Bangladesh and Tibet.

Hundreds of Australians Unaccounted for in Nepal - Foreign Affairs Dep't

India to Issue Free Visas to Tourists Stranded in Nepal