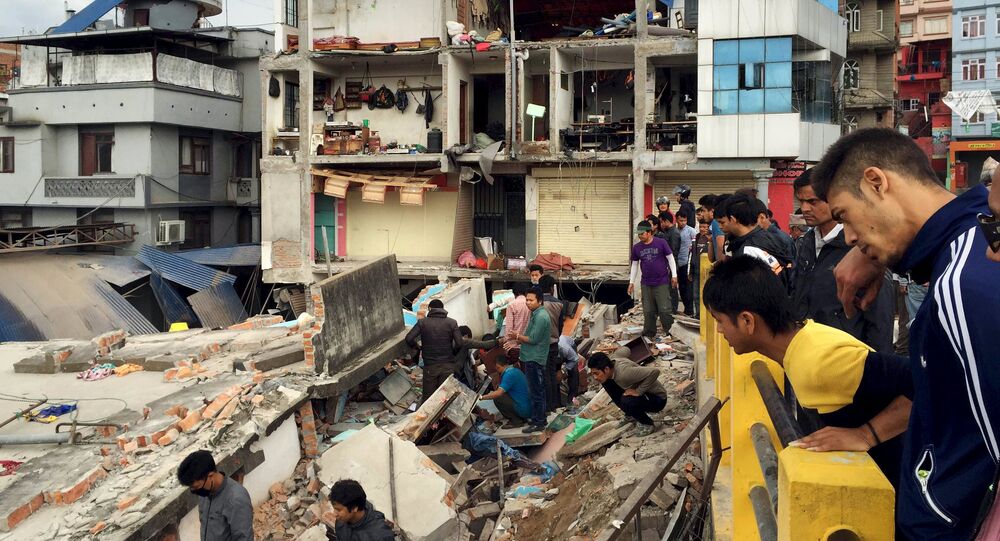 At least 849 people dead in a massive earthquake which devastated parts of Nepal on Saturday, according to police.

The Nepalese government has declared a state of emergency in the areas affected by the earthquake as the death toll has risen to 876.

Before and after photos taken by @siobhanheanue shows scale of damage after Nepal #earthquake http://t.co/Q3RzK2vAyi pic.twitter.com/K3ddmX0rIv

According to Nepal police spokesman Kamal Singh Bam, interviewed by the BBC, at least 876 people have been killed and more than 1,700 have sustained injuries.

The number of casualties is expected to rise further as hundreds of people are feared trapped under the rubble of collapsed buildings. The earthquake caused massive damage in Nepal's capital Kathmandu."

The earthquake happened about 82 kilometers (51 miles) northwest of Nepal’s capital Kathmandu, where several buildings collapsed. Tremors could also be felt in New Delhi and other northern and eastern Indian states, a Sputnik correspondent reports.

"Everything was shifting. Doors were jammed because of the force. I almost wasn't able to get out," a witness told Sputnik.

Thirty-six people have been confirmed killed in India after a massive earthquake in neighboring Nepal, India's Minister of Home Affairs Kiren Rijiju said.

In the northeastern Indian state of Bihar, which borders Nepal, 25 people were killed and 133 sustained injuries. Four people died and 15 school children were injured in the state of West Bengal, while seven were killed and 43 injured in Uttar Pradesh, Rijiju told reporters.

The massive earthquake has also triggered an avalanche at Mount Everest.

Panic has erupted at base camp which was full of climbing teams at the moment and had been "severely damaged", while one said the quake triggered a "huge avalanche".

An avalanche triggered by earthquake in Nepal has claimed the lives of 18 people on Mount Everest, CNN-IBN reported.

The Indian Army has so been able to recover 13 of the bodies, according to the news outlet.

Group of Russian Tourists Not Responding After Nepal Earthquake