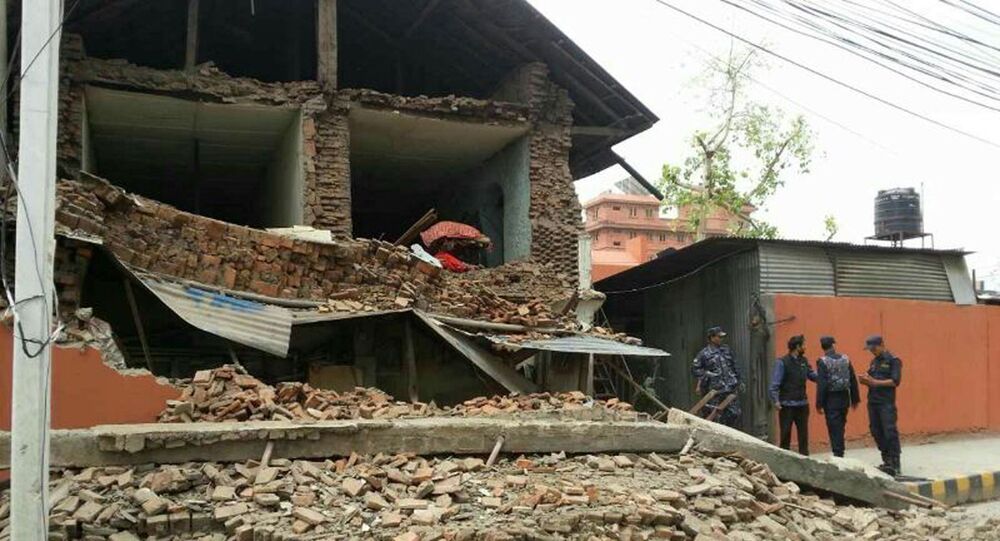 Some 400 people may be trapped trapped under the rubble of the Dharahara tower in Nepal’s capital Kathmandu, local media reported Saturday.

The earthquake, which took place about 82 kilometers (51 miles) northwest of Kathmandu, has reportedly caused severe damage in the city and triggered an avalanche in Mount Everest. Kathmandu's Tribhuvan International Airport has been closed.

At least four people have so far been confirmed killed, the CNN-IBN television channel reported.

Tremors of the earthquake could also be felt in neighboring India, where a teenage girl was reportedly killed when a building collapsed.

Due to the lack of beds at local hospitals, people are being treated on roads which have been turned into makeshift hospitals, Sputnik’s India correspondent reports.

I meditated in these temples everyday. Now they are gone. So sad. #Nepal #Nepalquake Sending metta and prayers. pic.twitter.com/cLaOS6uYGf

Indian Prime Minister Narendra Modi has called an emergency meeting to assess the situation, according to Home Ministry sources interviewed by Sputnik.

We are in the process of finding more information and are working to reach out to those affected, both at home & in Nepal.

The European Mediterranean Seismological Centre initially reported the magnitude of the earthquake to be 7.5 but shortly revised it to 7.8, while the US Geological Survey has assessed its magnitude as 7.9.