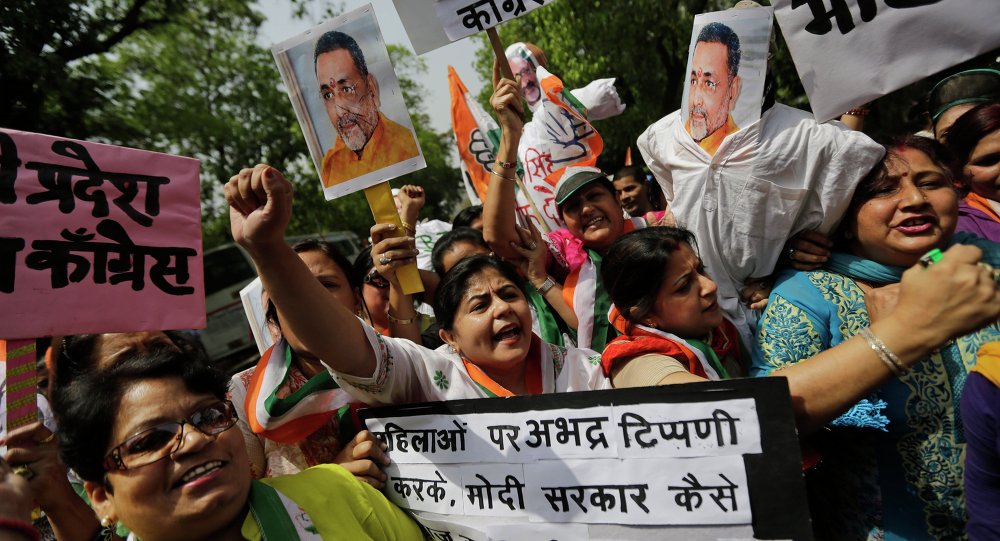 The Minister of State for Minority Affairs, Mukhtar Abbas Naqvi says that the recent merger of six Indian opposition parties is a part of election campaign and not a long-term political development.

NEW DELHI (Sputnik) — The recent of six Indian opposition parties is a part of election campaign and not a long-term political development, the Minister of State for Minority Affairs, Mukhtar Abbas Naqvi, told Sputnik on Wednesday.

Six opposition parties merged on Wednesday to counter the growing influence of the ruling Bharatiya Janata Party (BJP) prior to the Assembly elections in India's Bihar region.

© AP Photo / Altaf Qadri
Six Indian Opposition Parties Merge to Counter Ruling BJP
"It's basically a merger of parties and not a merger of hearts. These parties come together to fight the challenge of elections in the states of Bihar and Uttar Pradesh," the minister said.

Naqvi has stressed that he had no doubt BJP would still come out as the winner of both elections.

"India has seen such type of mergers and coalitions in the past and its people know these type of opportunistic politicians very well," the minister added.

Six regional parties, which have come together to form a new party, besides Samajwadi, whose leader Mulayam Singh Yadav will be the National president of the new alliance, are Rashtriya Janata Dal, Janata Dal United, Indian National Lok Dal, Janata Dal and Samajwadi Janata Party.

Mukhtar Abbas Naqvi, besides being a minister, also has a post of the BJP's vice-president. His party won the 2014 Indian general election with an outright majority in the Parliament. Narendra Modi, party's parliamentary leader, assumed country's prime minister's office on May 26, 2014.