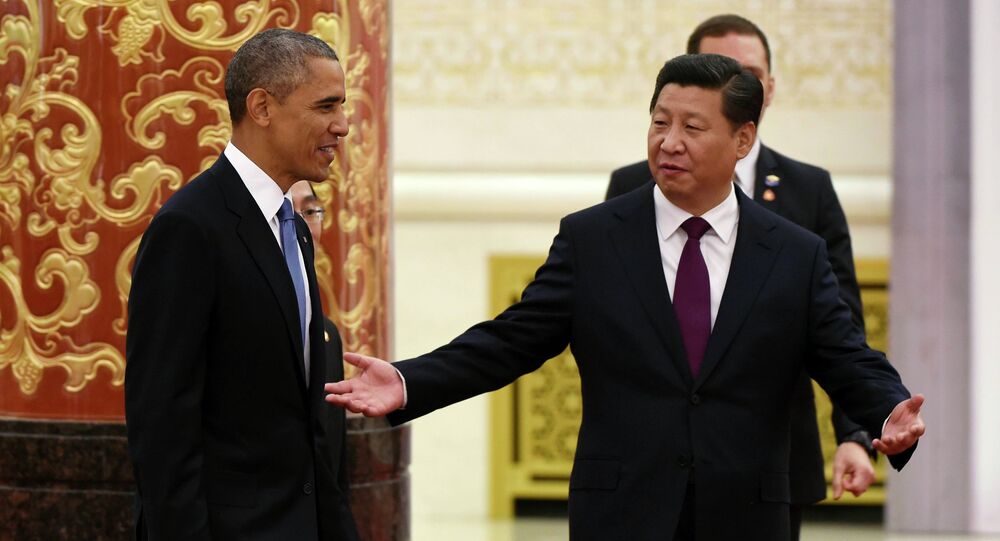 During his visit to Jamaica, US President Barack Obama said Washington is ‘concerned’ China is using its ‘sheer size and muscle’ to intimidate countries smaller in size.

During his visit to Jamaica, US President Barack Obama said Washington is ‘concerned’ China is using its ‘sheer size and muscle’ to intimidate countries into subordinate positions.

© AP Photo / Eugene Hoshiko
China Urges US to Refrain From Belligerent Rhetoric, Actions in Asia
The statement comes following the recent effort of China to warm up relations with its neighbors. During Vietnamese Communist Party Chief Nguyen Phu Trong’s visit to China, the two nation’s leaders talked about carrying on a "brotherly and comradely" relationship.  This can hardly be characterized as a subordinate relationship, Xinhua pointed out.

Claims that China is shoving aside the Philippines or Vietnam are baseless and ignorant, although it is no surprise that Washington’s propaganda never misses a chance to hype up a ‘China threat’.

Washington has repeatedly broken its pledges of not taking sides over disputes in the South China Sea. Moreover, it has practiced double standards regarding the construction works by China and other countries in the Nansha Islands, despite the fact that China had shed light on land reclamation as it is aimed at defense and improving civilian services.

Obama said, "We think this issue can be solved diplomatically". While he is thinking about diplomacy, China is practicing it, Chinese media reported.

Nguyen Phu Trong's China visit at the invitation of President Xi Jinping, as the Vietnamese side said, has been a great success. The two sides reached important understanding on some issues and will solve any dispute with sincere communication.

© AP Photo / Bullit Marquez
Hint to Beijing? US Organizes Massive War Games With Philippines in South China Sea
Speaking on behalf of China’s Foreign Ministry, Hua Chunying came forward with a public statement on Thursday to address Mr. Obama’s concerns. Hua claimed everything China does in the region is to ensure peace and the safety of the commercial routes going through the South China Sea.

As an outsider, the United States should respect China's sincerity in solving the disputes through direct negotiation with the countries concerned. The US should contribute to regional peace and stability, rather than stir the quiet waters with careless words and deeds, Xinhua reported.