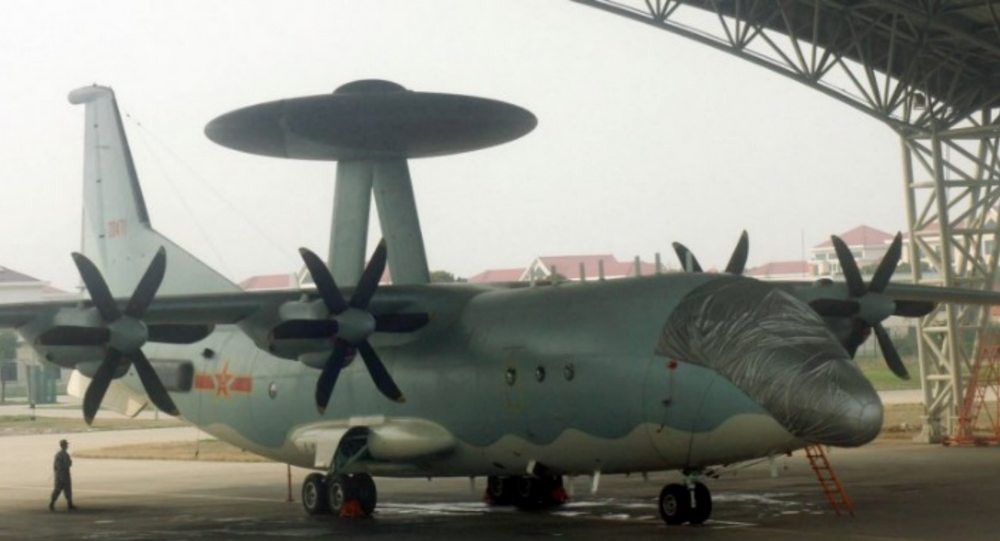 Capable of tracking nearly 100 vehicles at once, the Chinese military has launched its new airborne early warning and control aircraft (AEW&C), taking to the skies with the People’s Liberation Army Air Force (PLAAF).

The PLAAF has been offering sneak peeks into the existence of the KJ-500 for months now. Late last year, it released images of the plane’s paintjob, a wavy, sky blue with a white underbelly. But new images from the Chinese military show the aircraft now that it’s entered service.

A slightly smaller version of an earlier four-turboprop plane, the KJ-500 is fixed with a phased-array radar developed by the Nanjing Research Institute of Electronic Technology. The array consists of three parts, all housed within a saucer-shaped dome atop the aircraft. That dome also features a satellite communications antenna, as well as two passive electronic intelligence arrays.

Built by the Shaanxi Aircraft Corporation, developers had also considered a tear-drop shaped dome, which would have allowed larger radar systems to be installed, but that plan was later scrapped.

AEW&C aircraft can carry out surveillance operations over both ground and sea-based targets. Air-based radar allows for better detection, and has enhanced abilities of distinguishing between friendly and hostile aircraft. The plane’s high altitude also makes it harder for enemies to spot.

China isn’t the only one with new surveillance aircraft in the region. Last month, the US Navy admitted that it was launching P-8A Poseidons out of bases in the Philippines. The Pentagon’s most advanced spy planes, the Poseidons are monitoring the contentious waters of the South China Sea, where various nations – including China – claim overlapping territories.

For its 2015 budget, China increased military spending by 10%, marking a steady rise over the last two decades. That budget now totals $141.45 billion, second in the world only to the US defense budget of $600 billion.