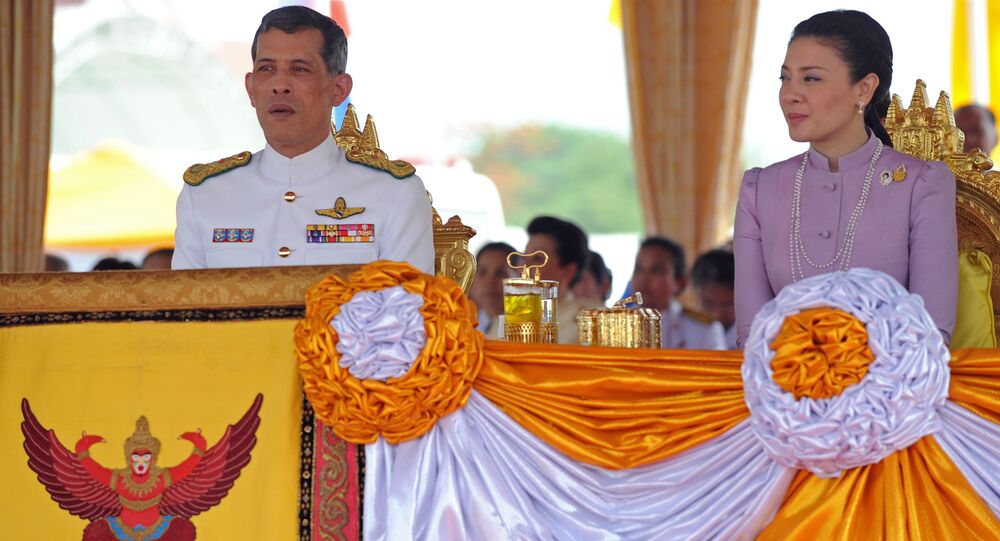 Three brothers of the former Thai princess Srirasmi have been jailed for five and a half years each after confessing of the crimes of theft, insult to the monarchy and illegal detention.

© Flickr / null0
Thailand Sentences Generals to Six Years for Insulting King, Running Casino
The three brothers of Srirasmi Suwadee, formerly known as Princess Srirasmi, faced 11 years in prison each, but their sentences were cut to 5 and a half years because they confessed to the crimes of theft, insulting the monarchy and illegal detention.

"They mentioned 'the highest level' in order to force (a victim) to hand over money, which defamed the monarchy and caused damage," the judge said in a statement; the Thai term ‘the highest level” refers to the country's monarchy.

The imprisonment of Natthapol, Narong and Sitthisak Suwadee comes after their parents, Apiruj and Wanthanee Suwadee, were sentenced on similar charges last week and got two and a half years each.

At least seven relatives of the former princess have been arrested and accused of corruption and abuse of their royal connections, misusing their royal status to amass vast wealth since she divorced Crown Prince Maha Vajiralongkorn and relinquished her royal title last December.

Her uncle, a former police general, has been accused of amassing vast wealth through smuggling and gambling rackets.

© AFP 2020 / Nicolas ASFOURI
Thailand: Condoms and Morals
Srirasmi, the prince's third wife, married him in 2001 and they have one son, Prince Dipankorn Rasmichoti. Srirasmi has left her 9-year-old boy in the care of her former husband. This will allow him to maintain his royal titles.

In December, Prince Dipankorn departed Bangkok for Munich, where he joined a local school.

Accompanying him was Vajiralongkorn’s new royal consort, now known as Maj. Gen. Suthida Vajiralongkorn, a former Thai Airlines flight attendant, who is tipped to become the next queen.

She recently gave birth to a baby boy and presumptive new heir to the throne after Vajiralongkorn passes from the scene.

According to the Thai mass media, two years ago Prince Dipankorn was diagnosed with attention deficit hyperactivity disorder, officially eliminating him from the succession process.

While Thailand's 87-year-old King Bhumibol remains the world's longest-serving monarch, Thailand has been wracked behind the scenes for several years with uncertainty over the succession process.

“It is a part of a preparation for a smooth royal transition by eliminating the consort, who could taint the process because of her undignified past,” the news website Asia Sentinel quotes its Thai source as saying. “The crown prince has a new wife, who has been promoted fast in the military and just gave birth to a baby boy. There seems to be a deal between the crown prince and the palace elites to eliminate Srirasmi, (also referred to as Srirasm), who has to this day been viewed with disgust because of her low-class background. Some elites even said that they would not prostrate in front of a bar girl.”

Thailand's Crown Prince Vajiralongkorn has already asked the government to strip his ex-wife's family of their royal titles.

Thailand Seeks to ‘Clean Up’ Image With Beach Party Ban