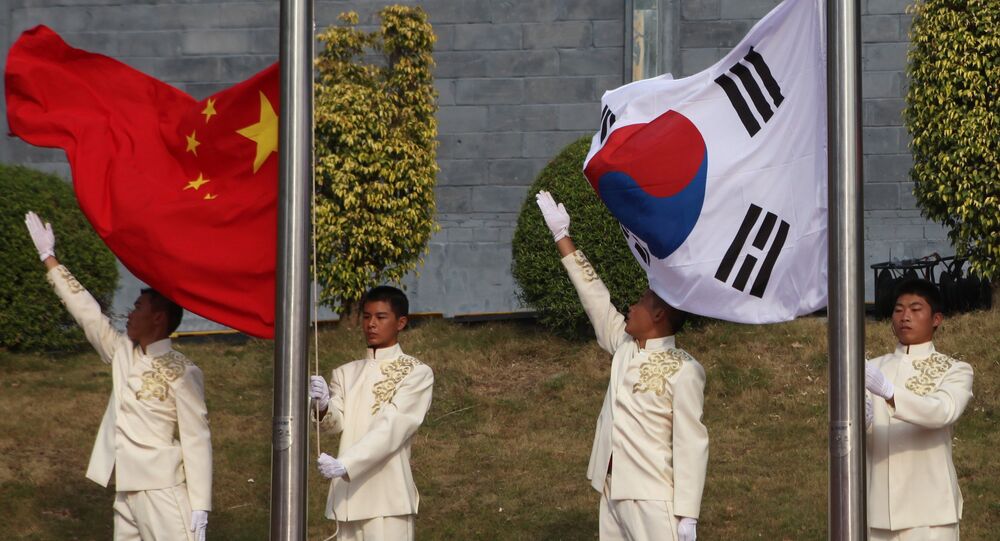 South Korean officials have been in damage control over the past several days following revelations by a senior official earlier this week that a "non-consensual" scenario on unification with North Korea was among the contingencies the Committee for Unification was looking at.

© AFP 2020 / RICHARD JUILLIART
Two Koreas Set to Clash Over Human Rights at United Nations
Chung Chong-Wook, the Vice Chairman of the Presidential Committee for Unification Preparation, said he had used the "wrong words" at a breakfast forum Tuesday where he had said that South Korean authorities envisioned a "variety of road maps" for unification, including "non-consensual unification."

This was the first high-ranking admission of a scenario envisioning North Korea's absorption by South Korea. Speaking at the Reserve Officers' Training Corps, Chung also revealed that South Korean authorities had plans for dealing with North Korea's political elite: "There is a large variety of North Korean elites, and the constituency of the Workers' Party is quite diverse, so we will classify them and deal with them," Chung said, cited by South Korea's JoonAng Daily.

Chung did his best to clarify his remarks on Thursday, noting that "our government is pursuing a peaceful reunification, not unification through absorption unilaterally by either the South or the North," Yonghap reported. He added that the Presidential Committee "has reviewed various road maps, but it has determined that a peaceful reunification is the only alternative in ending the division and going forward [with the North] to a new future."

© AP Photo / Ahn Young-joon, File
N. Korea Warns US About Nuclear Strike in Response to 'Provocative' Drills
Also on Thursday, the leaders of seven South Korean civic groups held a press conference in Seoul, noting in a joint statement that "any attempt to reunify the two Koreas by force would bring extreme cross-border confrontation and an end to inter-Korean relations." The statement urged the government to "give up any attempt to reunify the North through absorption and [to] take a path of win-win co-existence."

© Flickr / U.S. Missile Defense Agency
South Korea Says No to US Missile Defense System
Park unveiled her vision for unification last March in Dresden, Germany. North Korea has slammed the resulting Dresden Declaration, eying the South's initiative with suspicion, and seeing it as a possible attempt to unify the two countries by force.

An official speaking on condition of anonymity told The Korea Herald Wednesday that the Unification Panel has been bogged down "by administrative work, including…contacts with more than 50 civilian experts and advisors." The official noted that creating a separate panel to study forceful unification would be "impossible," given its current lack of capacity.

US Ambassador to South Korea Leaves Hospital, Ready to Return to Work

South Korea Says No to US Missile Defense System

Attacker of US Ambassador to South Korea Demanded Reunification With North