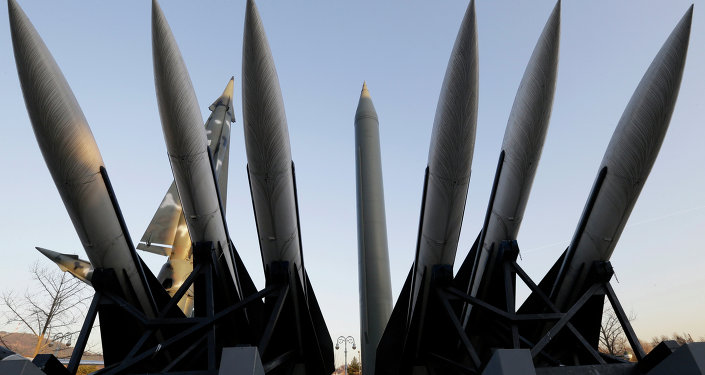 An urgent statement of the DPRK (Democratic People's Republic of Korea) leader who addressed to the country's military forces was published by a state-run North Korean newspaper Saturday.

According to the media resource, Kim Jong Un insisted that in the light of forthcoming reunification of Korea the DPRK's armed force should ensure its combat readiness in order to withstand the country's enemies in ideological, political, military-technical and physical confrontation.

© REUTERS / KCNA
Scientists Claim North Korea Conducted Secret Nuclear Test
The statement was made by the North Korean leader during his visit to the Pyongyang-based Victorious Fatherland Liberation War Museum, devoted to the Korean war of 1950-1953. The DPRK's media outlets do not specify the date of Kim Jong Un's visit.

Pyongyang's security concerns have flared up ahead of joint military drills of South Korea and the United States. The DPRK leadership considers the drills a blatant provocation that aims to unleash a full-scale war against North Korea. Pyongyang warns its potential rivals against military actions threatening them with a backlash from the DPRK.

It is worth mentioning that the United States and North Korea still have no formal diplomatic relations. The sides have technically been in a state of war since the 1950-1953 war ended with a ceasefire, while no peace treaty was concluded. Pyongyang has repeatedly called for an official peace treaty with Washington, but the White House delayed the agreement signing. Since the Korean War the United States has deployed a substantial military contingent in South Korea, comprising of about 28,000 US Army troops.

Pyongyang Threatens to ‘Give a Military Rebuff’ to US-S. Korea Drills

US to Send More Troops to Joint Drills With Seoul, Pyongyang Fears Invasion