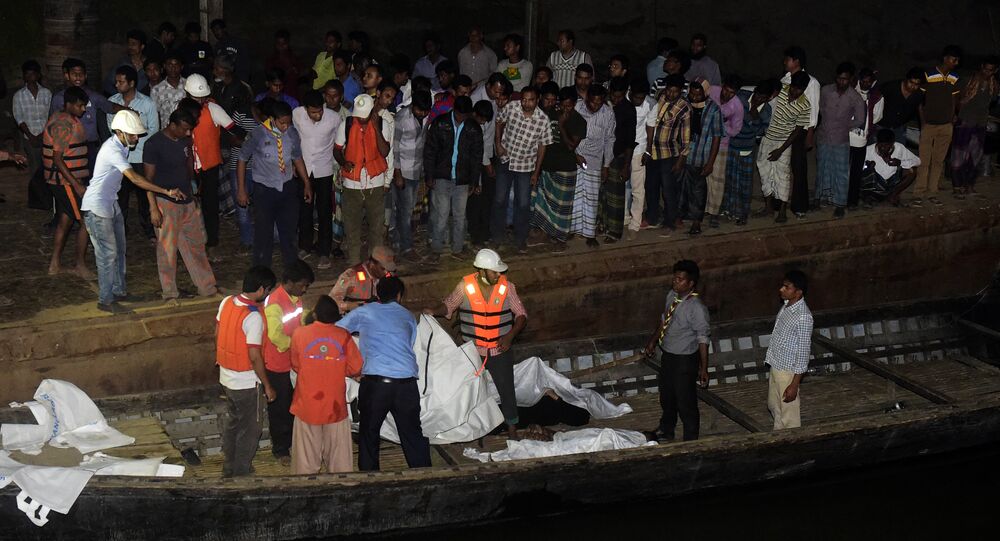 The death toll after the ferry accident in Bangladesh reached 65 as a result of a river ferry crashed with a cargo ship and capsized near Dhaka, the capital of Bangladesh.

The death toll after the ferry accident in Bangladesh reached 65, after the rescue workers found 24 more bodies Monday, media reports.

Update: 41 bodies recovered & dozens more feared dead after a ferry sank in the #Padma river, in #Bangladesh on Sun. pic.twitter.com/UkvUXscPBm

A river ferry crashed with a cargo ship and capsized near Dhaka, the capital of Bangladesh. Ferry accident that killed at least 43 is the seventh crash so far this year in Bangladesh: http://t.co/Ccma6IB5tO pic.twitter.com/WHtGifA8Tq

A search and rescue operation is currently underway.

Despite the ferry's capacity of 140 passengers, the Daily Star reported a number of witnesses as saying more than 200 people were actually on board.

According to Bangladesh's shipping department officials cited in the publication, the ferry's owner applied to renew its annual safety license, which was due to expire on Tuesday, February 24.

The captain of the cargo ship and his assistant were arrested by the police following the incident, the newspaper reported earlier.

According to local media, accidents of this kind are common in Bangladesh. Earlier this month, 13 people died in a ferry accident in the south of the country.

48 dead including 11 children after ferry sinks in river in Bangladesh http://t.co/MNxS6e8nXH

Ferry disasters, often caused by overcrowding and poor safety standards, are common in Bangladesh that relies heavily on shipping traffic.

A ferry has sunk in Bangladesh leaving at least 41 people, including 11 children, dead. http://t.co/XrGNiIyQPq #9News pic.twitter.com/4PU15P0hRJ