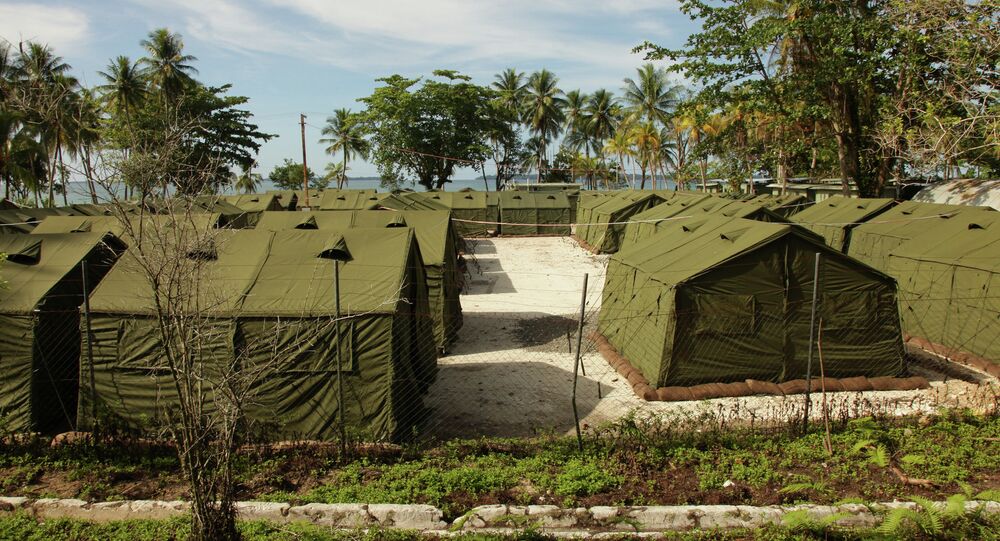 Refugees seeking asylum in Australia have been subject to severe beatings by security guards. Some 700 detainees at the Manus detention center have been on a hunger strike over the Australian government's plan to resettle them on the island.

Refugees seeking asylum in Australia that are being held at the detention facility on Manus Island have been subject to severe beatings by security guards, as the detainees continue week-long riots in the facility.

In an attempt to end the protests, security guards entered the camp by force on Monday, manhandling refugees and taking away the alleged ringleaders.

"Excessive and unnecessary force was used [by police and security guards] in breaking into Delta compound on Monday, when peaceful demonstrators and hunger strikers were arrested and subsequently 'beaten like dogs' by PNG [Papua New Guinea's] police," Michelle Bui, RRAN activist told Sputnik.

Bui added that RRAN "continue to be concerned about the brutality with which the men are treated and believe that the purpose behind the degree of force that is being used is to stop the flow of information and deny these men the opportunity to tell the world what is happening to them."

Some 700 detainees at Manus Island detention center have been on a hunger strike over the Australian government's plan to resettle them on the island, after the country's Immigration Minister Peter Dutton said on January 16 that detainees from the center would "never arrive in Australia".

© REUTERS / Refugee Action Coalition/Handout via Reuters
Migrant Swallows Razor Blades in Protest at Australia’s Detention Center
Protesters claim they fear for their lives due to the detention conditions and attacks by locals. The asylum seekers are demanding the Australian government either give them refugee status or hand over their cases to the United Nations High Commissioner for Refugees (UNHCR).

"Desperation continues to grip the center and we have grave concerns regarding the safety of all asylum seekers on Manus Island. We maintain that the treatment of these men is tantamount to torture. Resettlement in PNG is unsafe and untenable; these men urgently need a resettlement option either in Australia or a safe third country. Calls continue for UN intervention and we agree that independent observers and media need to be given free and open access to the center," Bui stated.

In an attempt to raise public awareness, two asylum seekers swallowed razor blades on Wednesday. According to Bui, who has been in direct contact with some of the detainees on Manus Island, the men are now being treated at the medical center.

Guards and asylum seekers assist one of two men who tried to hang himself on #Manus Is. Both reportedly survived. pic.twitter.com/Eiqd5xXCjf

Moreover, Bui was informed later on Wednesday that an Iranian man and a Sudanese man attempted to hang themselves at the center. They have also been taken to a hospital, according to the source.

© Flickr / DIBP Images
Protesters at Manus Island Ready to Donate Organs to Australians
"These horrifying and ongoing acts of desperation are a testament to the appalling abuse of human rights, inherent in the mandatory detention system," Bui told Sputnik.

The policy of mandatory detention of those who enter the country without a valid visa was introduced in Australia in 1992.

Asylum seekers, primarily from Iran, Iraq, Afghanistan and Sri Lanka, travel to the Australian islands by boat and are settled in offshore detention camps, such as the one on Manus Island.

Sydney rallies in solidarity with those on hunger strike at the #Manus Island detention centre http://t.co/LoJoyjBNqE pic.twitter.com/Fwbe9RhHDB

There have already been similar incidents in Australia. In February 2014, a hunger strike at the detention center turned into a riot that left one refugee killed and some 70 people injured.