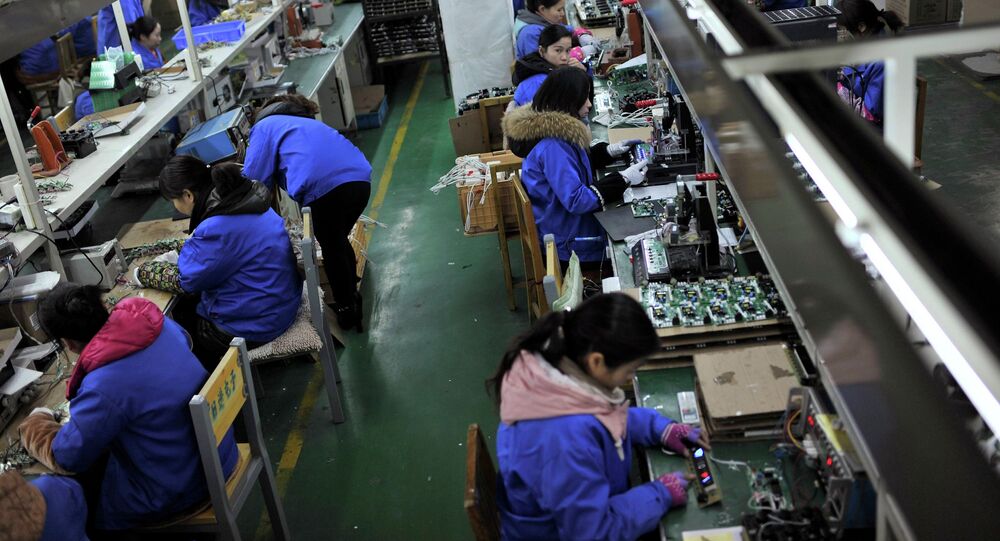 The National Bureau of Statistics of China reported Tuesday that China's GDP in 2014 grew by 7.4 percent, with the total value of imports and exports in the year 2014 rose by 2.3 percent.

© REUTERS / Aly Song
Stock Market Crash in China Biggest Since 2009, Rest of World Set to Rally
BEIJING, January 20 (Sputnik) – China's GDP in 2014 grew by 7.4 percent, with the highest growth figures registered in the second quarter of the year, the National Bureau of Statistics of China said Tuesday.

The total value of imports and exports in the year 2014 rose by 2.3 percent, however, it slowed down, in comparison to previous results.

© REUTERS / Stringer
China's Rate of Inflation Nears Five-Year Low
The national disposable income per capita stood at 20,167 yuan ($3,243), which reflects a nominal growth of 10.1 percent or a real rise by eight percent after deducting price factors.

According to the press release, the population of China was 1.368 billion people by the end of 2014, not including Hong Kong, Macao and Taiwan, which is 7.1 million more than in 2013.

The National Bureau of Statistics concluded by saying that China's economy has achieved a stable progress, and said it was necessary to concentrate on improving the quality and efficiency of the economic development.

China to Boost Cooperation with North Korea in 2015: Foreign Ministry

China Approves Projects Worth Over $1 Trillion to Boost Economic Growth

2015 Will Be All About Iran, China and Russia