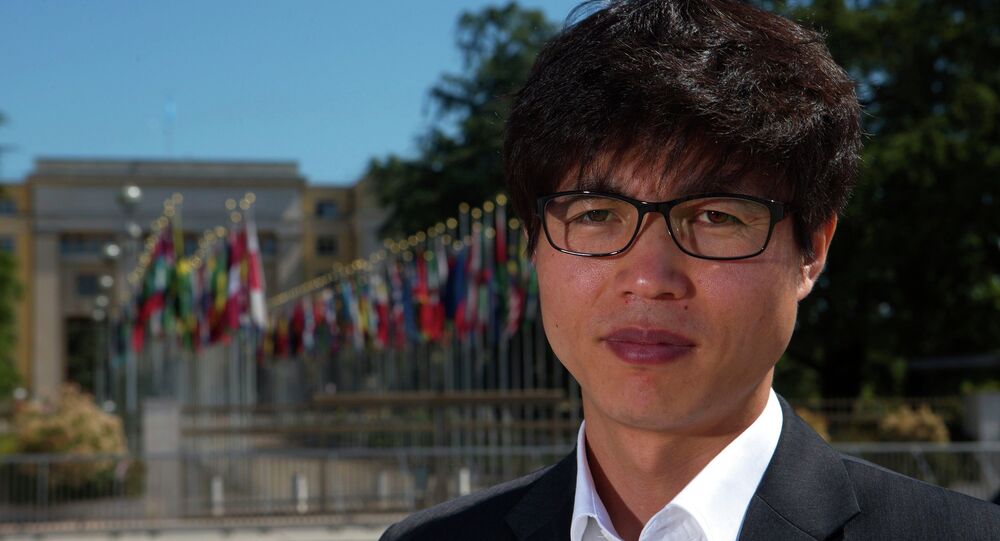 MOSCOW, January 18 (Sputnik) – Shin Dong-hyuk, a prominent defector from North Korea and the protagonist of a bestselling book narrating his harrowing life in and bold escape from a brutal prison camp, admitted he changed some parts of his story, the Washington Post reports.

© Sputnik / Marc Bennetts
North Korea Releases Video of Young Ex-Defectors Leading 'Happy Life'
"We all have something in the past that we never want brought to light. I too, forever wanted to conceal and hide part of my past. We tell ourselves that it’s okay to not reveal every little detail, and that it might not matter if certain parts aren’t clarified. Nevertheless this particular past of mine that I so badly wanted to cover up can no longer be hidden, nor do I want it to be," Shin Dong-hyuk wrote on Facebook.

Shin Dong-hyuk acquired international fame in 2013 after Blaine Harden, a former Washington Post journalist, wrote a book about his life. Titled "Escape from Camp 14", it narrates the story of "the only known person born in a North Korean prison camp that escaped and survived to tell the tale," as Shin Dong-hyuk describes himself. People, tossed into this high-security prison, are allegedly not allowed to leave. They are instead bound to suffer inhuman cruelty, including starvation, torture, forced labor, rape, forced abortions and murder.

Shin Dong-hyuk was born in Camp 14. His mother and brother were executed in front of his eyes there, he said. Like other prisoners in the camp, he was tortured. However, what makes him stand out is that in 2005, Shin Dong-hyuk managed to escape.

Two years after the graphic account of Shin Dong-hyuk’s life was published, the man, who became an icon for human rights activists, admitted he changed some details of the story, Blaine Harden said on his website. The changes mainly involved the timing and places, where events unfolded. However, the author claims that the essence of the most horrific incidents was not altered. For instance, Shin Dong-hyuk was once lowered over a fire.

© Sputnik / Ilya Pitalev
UN to Consider Resolution on North Korean Human Rights Situation in December: Reports
The defector told Harden that he was transferred to less secure Camp 18, when he was approximately six years old, according to the Washington Post. There he told prison authorities that his mother and brother were planning to escape. They were then executed in that prison, not at Camp 14. The defector also unveiled that he escaped the camp on two previous occasions, in 1999 and 2001, but was caught in China and handed over to North Korea.

Shin Dong-hyuk thanked those, who supported and believed in him. "I am so very grateful and at the same time so very sorry to each and every single one of you," he said in a post on Facebook.

Greg Scarlatoiu, executive director of the Washington-based Committee for Human Rights in North Korea believes that details do not matter. "Camp 14, Camp 18, Auschwitz, Dachau, Birkenau — what difference does it make?" he asked, as quoted by the Washington Post. "[Shin Dong-hyuk] is a political prison camp survivor, period."

Following the revelations, Harden said he would try to make the necessary corrections in his book.