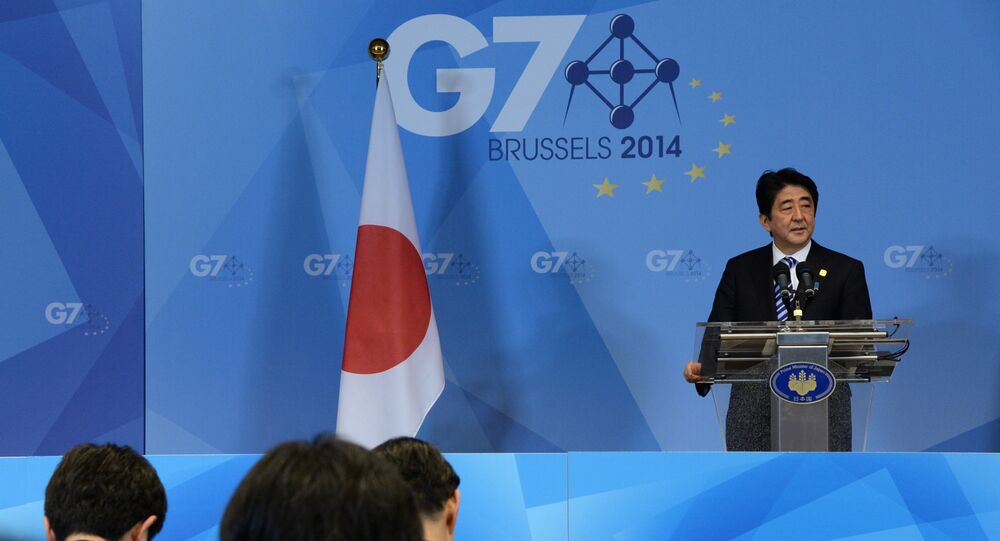 The two countries support a dialogue with Russia, while the United States insists on extending sanctions.

According to the agency, the divergence in positions between the US and its partners, Germany and Japan, on the question of sanctions against Russia became apparent during a meeting of G7 emissaries during preparations for the group’s summit last December.

The United States insists on prolonging the sanctions enacted against Russia, due to the fact that some of them expire in March 2015, and has called upon its partners in the group to consolidate their positions on the issue. However, Germany and Japan consider dialogue with Russia necessary.
"Japan believes that strengthening its pro-American position could influence the Russian president’s visit to the country this year, which was agreed upon in November of last year in Beijing," the agency reports.

© AP Photo / Shizuo Kambayashi
Japan Policy to Russia Pegged to West, Change Unlikely: Ex-Minister's Aide
Japan’s position is that "other than sanctions, it is necessary to continue a dialogue." Germany believes that there are some sanctions that have become progressively less necessary, and the softening of the G7's position could facilitate "a demonstration of flexibility on Putin's part," Kyodo News notes.

At the emissary meeting, the American side insisted that "Putin skillfully exploits the lack of agreement among G7's members," and demanded unity on matters including the possibility of enacting new sanctions.

The agency notes that the sanctions that Japan enacted against five Russian financial institutions do not have expiration dates.

© AP Photo / Yoshikazu Tsuno - Pool/Getty Images
Japan Should Make Effort to Lift Sanctions Against Russia: Former PM
"Japan has a territorial dispute [with Russia], Germany depends on [Russian] national gas shipments. The coordinated position of Germany and Japan with relation to Russia is explained by these circumstances," the agency conlcudes.