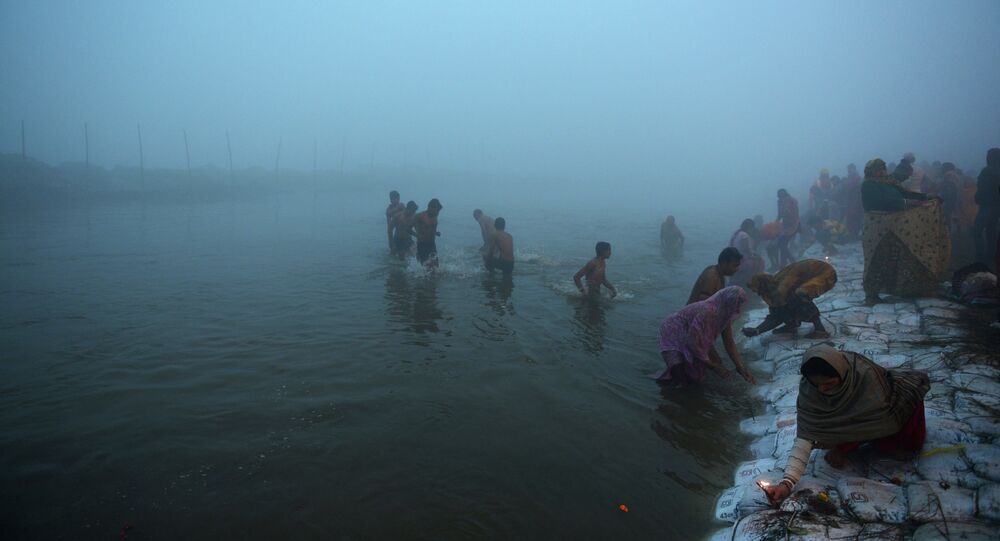 Fifty more bodies were recovered from the Ganga River in the Indian state of Uttar Pradesh on Wednesday, prompting local authorities to ordered a probe

MOSCOW, January 14 (Sputnik) — The number of bodies which have been found floating in India's famous Ganga River currently stands at about 104.

Local police are saying that the bodies were dumped there by families who could not afford a decent cremation as per Hindu tradition, India’s newspaper The Hindu reports.

© AP Photo / Altaf Qadri
Indian Police Recover Over 200 Crude Bombs in Country's East: Reports
On Tuesday, Police Inspector General A. Satish Ganesh said that the bodies, which were ostensibly disposed of in the Ganga River as part of last rites by their kin, surfaced after the water receded near Pariyar ghat.

"During preliminary investigation, local residents informed that instead of cremating the bodies of unmarried girls, they are set adrift in the Ganga River. Most of the bodies were badly mutilated so it was difficult to ascertain their gender," Ganesh said.

For his part, Police Director General A.K. Gupta ordered a full inquiry before arriving at a conclusion.

The district administration reportedly used JCB machines to fish the decomposed bodies from the river bed, in a step that was protested by local and the Bharatiya Janata Party, or BJP, India's conservative, Hindu nationalist party.

On Wednesday morning, BJP state president Laxmikant Bajpayi visited the site where the bodies were found. He expressed protest over what he described as "inhumane treatment" being meted out to the dead.

Officials promised that all of the bodies would be cremated in line with tradition by the district administration later on Wednesday.

© AP Photo / Tsering Topgyal
Ban Ki-moon Urges Action Against Rape and Sexual Abuse of Women in India
Meanwhile, volunteers from the Ganga Bachao Andolan, or Save Ganga Movement, have started a sit-in to say 'no' to the dumping of the dead in the Ganga River.

The recovery of bodies from the Ganga has caused a furor among residents, as they were found a day before the Makar Sankranti festival, when thousands take a holy dip in the river.

Devout Hindus bathe in the Ganges in an act of ritual purification, yet the 2,500 km river, which stretches from the Himalayas to the Bay of Bengal, is full of industrial waste water and untreated sewage; its banks are strewn with garbage.

Previous attempts to clean up the river, including the introduction of flesh-eating turtles to devour the charred remains of the dead who are cremated on its banks, have failed due to a lack of planning or coordination.

Prime Minister Narendra Modi, who was elected to represent the 3,000-year-old riverside city of Varanasi, has taken personal responsibility for cleaning up the river, as part of a broader push to husband the country's scarce water resources and improve standards of public health and hygiene.

© East News / AP
India Arrests Almost 40 Suspects in December Assam State Attacks: Reports
Due to the bad condition of the bodies, workers have refused to retrieve them, an officer said. Forensic samples are being taken by a team of doctors led by Chief Medical Officer Geeta Yadav. She said that as per the opinion of the doctors, a post mortem was not possible, instead sampling was being done for DNA testing.

Ms. Yadav said that the exact body count cannot be given as the recovery process was still underway.

Meanwhile, BJP alleged that the bodies were being buried with the help of a JCB machine. State president Laxmi Kant visited the spot last night and demanded a proper post-mortem cremation of the bodies. He also demanded a high-level inquiry into the matter.

The IG (Law and Order) party's A Satish Ganesh had said that bodies which were ostensibly disposed of in the Ganga River as part of last rites by their kin, surfaced after the water had receded near Pariyar ghat.

“During preliminary investigation, local residents informed that instead of cremating the bodies of unmarried girls, they are set adrift in the Ganga river,” the IG had said.

“Most of the bodies were badly mutilated so it was difficult to ascertain their gender,” he said.