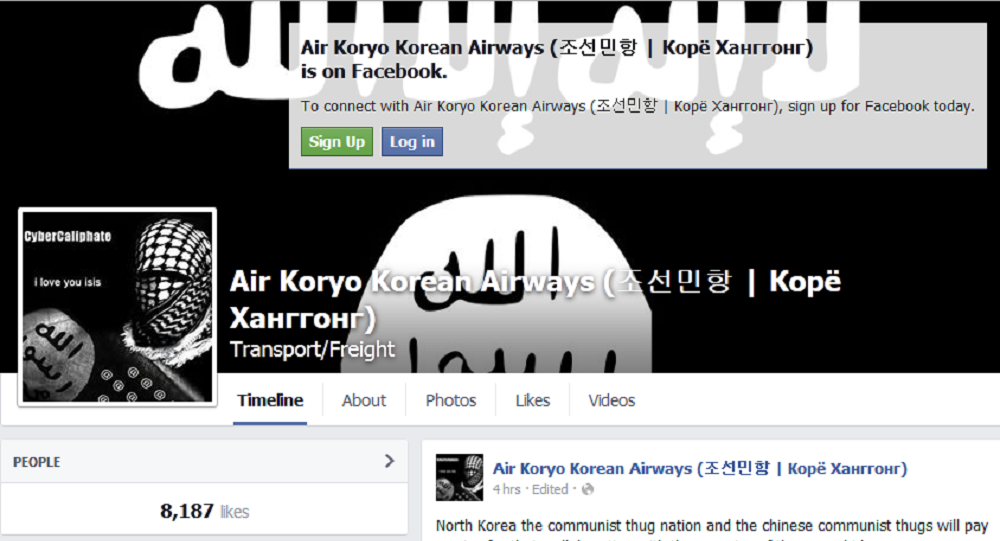 Supporters of the Islamic State militant group appear to have hacked North Korea's flagship air carrier in a bizarre choice of hacking target.

All the posts by airline officials were taken down on Wednesday, and replaced by photos of IS militants riding a captured American Humvee, along with an image of a weeping Kim Jong Un, the leader of North Korea, and other IS imagery and flags.
One post features a threat, saying "North Korea, communist thug nation, and the Chinese communist thugs will pay a price for their collaboration with the enemies of the muwahideen."

The page's 'likes' ostensibly include Abu Bakr Al-Bagdadi, the leader of the IS group, the "Islamic State of Iraq and the Levant" page, and Osama Bin Laden. The page received over 8,100 likes within hours of the hack, presumably from IS supporters and internet trolls.

© REUTERS / Mario Anzuoni
North Korea Wants Evidence of Its Involvement in Sony Hack: Pyongyang
The hacked account's profile image features a black and white rendering of a masked IS militant, the term "CyberCaliphate," and the phrase "i love you isis" [sic]. It is the same image that was posted earlier this week on the hacked Twitter and YouTube accounts of the US military's Central Command, which featured threats against American military personnel, along with a list of the officials' contact information. The hacked Twitter account also featured imagery of Pentagon surveillance intelligence, mostly of Chinese and North Korean military installations, which leads to questions about the real identity of the attackers.

China to Boost Cooperation with North Korea in 2015: Foreign Ministry