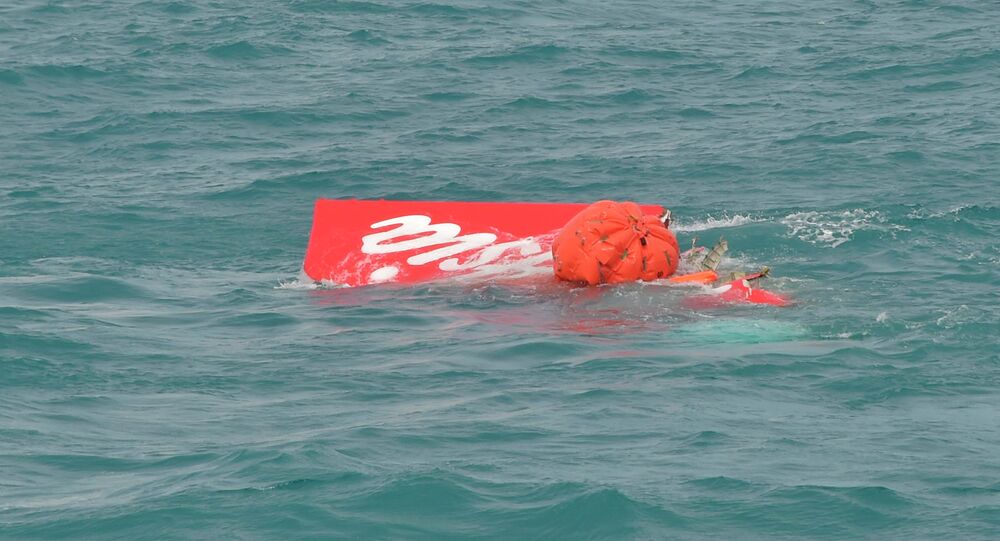 "Chief of Navy RADM Lai Chung Han just informed me that one of SAF’s [Singapore Armed Forces] ships, the MV Swift Rescue, has located the fuselage of the AirAsia plane in the Java Sea," Ng said. His statement also included photographs of part of the plane’s wing and the fuselage’s livery.

"The accident is a tragic event resulting in loss of many lives. I hope that with the fuselage located, some form of closure can come to the families of the victims to ease their grief," he said, adding that the Indonesian search authority was notified.

© AP Photo / Dita Alangkara
Part of Crashed AirAsia Plane's Tail Found in Java Sea: Official
On Tuesday, the director of the search and rescue agency, Air Commodore Suryadi Supriyadi said the fuselage had been spotted by rescuers in the Java sea about 1.7 nautical miles [3 km] from where the plane's tail was discovered.
Flight QZ8501 of Malaysia-based airline crashed into the Java Sea on December 28. All 162 passengers are assumed dead, with 48 bodies already recovered by rescuers. The cause of the crash is still to be determined. According to media reports, it could take up to two weeks to retrieve information from the plane’s black boxes.
...
Reddit
Google+
Blogger
Pinterest
StumbleUpon
Telegram
WhatsApp
22
Topic:
AirAsia QZ8501 Deadly Dive (95)