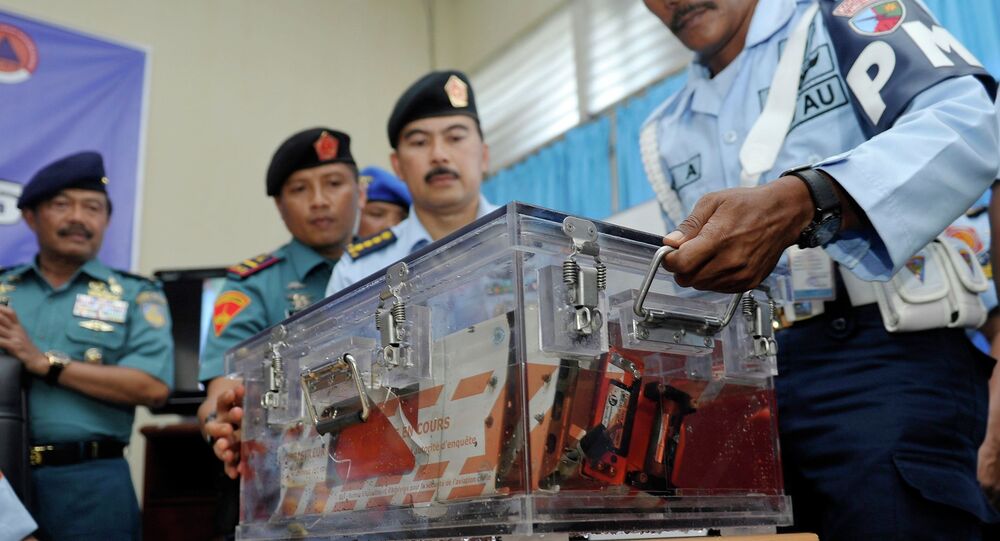 The chief of Indonesia's national search and rescue operation in the Java Sea contradicts the recent reports on the lift of the AirAsia flight QZ8501 second black box from underwater.

© REUTERS / Darren Whiteside
Second Black Box From Crashed AirAsia Plane Retrieved: Reports
BALI, January 13 (Sputnik) – The chief of Indonesia's national search and rescue operation in the Java Sea, working on the wreckage site of the AirAsia plane, has not confirmed reports of rescuers having lifted the second black box from underwater.

"No such report has been received. Indeed, they [divers] are currently working underwater, but there have been no reports," Detik News quoted Suryadi Bambang Supriyadi as saying Tuesday.

Earlier, Metro TV reported, citing an Indonesian transport ministry official, that a team of Indonesian divers had found the cockpit voice recorder from the AirAsia plane and had delivered it to investigators of the National Transportation Safety Committee (NTSC).

© REUTERS / Beawiharta
Divers Attempt to Retrieve Second AirAsia Black Box: Search Operation Chief
NTSC investigators have already received the first black box from the aircraft. The flight data recorder was found in the Java Sea on Monday, under part of the plane's wing.

The Malaysia-based AirAsia flight QZ8501 crashed into the Java Sea on December 28, while it was en route to Singapore from Indonesia. All of the 162 people on board are believed to have died in the crash.

Rescuers have recovered the bodies of 48 of the victims so far.

The cause of the crash has not been determined yet. According to NTSC, it could take up to two weeks to retrieve information from the plane's black boxes, which could offer some answers as to the reason behind the AirAsia plane crash.