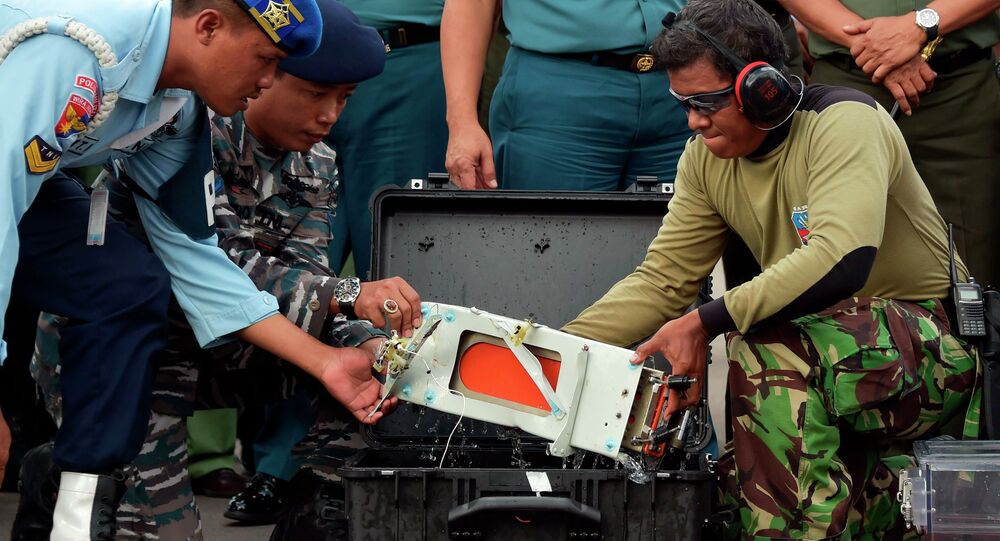 Indonesian officials have announced Monday that AirAsia plane may have exploded when it hit the water. Indonesian navy divers retrieved one of the black boxes and located another underwater.

© REUTERS / Wahyu Putro/Antara Foto
AirAsia Plane's Black Box to Be Retrieved Monday: Indonesian Transport Minister
MOSCOW, January 12 (Sputnik) – The AirAsia plane that crashed more than two weeks ago over the Java Sea is said to have exploded when it hit the water, according to the Guardian.

A team of divers located both of the plane’s black boxes. Indonesian navy divers retrieved one of the boxes and located another underwater on Monday.

“We succeeded in bringing up part of the black box that we call the flight data recorder,” national search and rescue chief Bambang Soelistyo told reporters in Jakarta, as quoted by Irish news website TheJournal.ie.

The black box was reportedly found under the wreckage of a wing. According to Soelistyo, divers are still trying to retrieve the second black box, which is stuck under heavy wreckage, the Guardian reports.

The initial analysis of the recovered black box indicated that the plane exploded when it hit the water.

© REUTERS / Darren Whiteside
Indonesian Rescuers Locate Second AirAsia Jet Black Box: Reports
“It exploded because of the pressure,” said Suryadi Bambang Supriyadi, search and rescue operation coordinator, as cited by the Guardian. “The cabin was pressurized and before the pressure of the cabin could be adjusted, it went down – boom. That explosion was heard in the area.”

The black box will be taken to Jakarta, Indonesia’s capital, for further analysis. It could take a couple of weeks before investigators manage to download all the data from the recovered black box, the Independent reports.

First black box from AirAsia Flight 8501 on its way to Jakarta; to be downloaded tonight or Tuesday morning #QZ8501

AirAsia Flight QZ8501 crashed on December 28, on its way from Indonesia to Singapore. All 162 people on board were killed. The plane lost contact with air traffic control less than halfway into its scheduled two-hour flight.