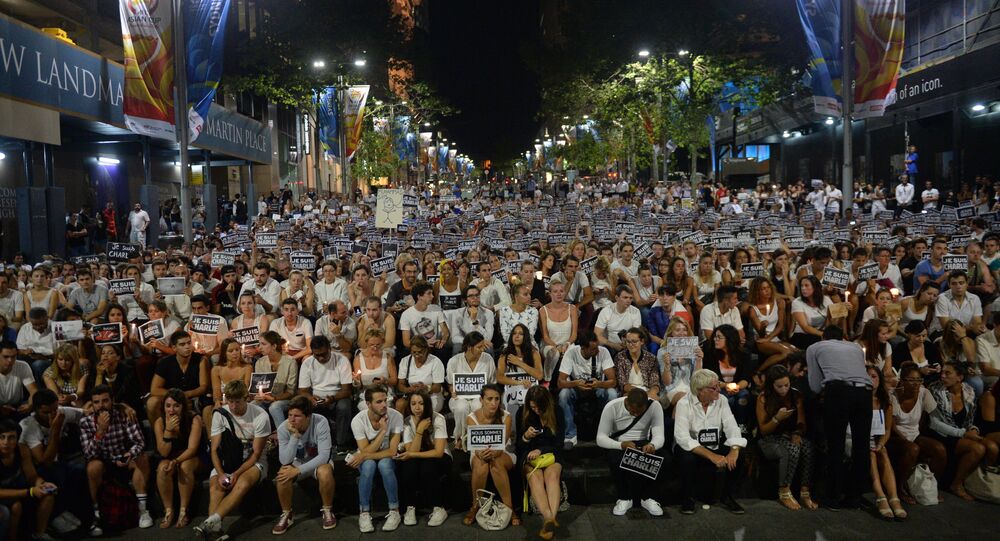 Hundreds took part in a rally for the 17 people who lost their lives in an assault on the office of Charlie Hebdo magazine and a kosher supermarket in Paris.

MOSCOW, January 11 (Sputnik) – Hundreds of Australians and foreigners flocked to Sydney's Martin Place, the scene of a deadly siege in mid-December, to take part in a rally for victims of the brutal attacks in Paris, in a global display of solidarity against radicalism, the Guardian reports.

© REUTERS / Youssef Boudlal
Unity March on Sunday to Draw Over Million to Paris After French Attacks
The rally, titled "No Fear for Freedom" was held "to show our unity and re-affirm our values and principles, and to pay respect to the victims of the recent tragedies," the organizers said in a post on Facebook. "It is not a day of remembrance just for French people, but a day to celebrate human values for all humanity."

"We have to stand united," Christophe Lecourtier, the French ambassador to Australia, told those present, as quoted by the newspaper. "We have to work for a better future and a better future means being more united than before, respecting differences of religion, of opinion, but thinking that the values we share are bigger than the diversity and the differences among us."

A few more pics from the #JeSuisCharlie #Freedom rally in Martin Place, ahead of "million" march in Paris pic.twitter.com/7bswvyAkHF

Raining non-stop in Sydney but hundreds of French community out here in Martin Place for #JeSuisCharlie rally pic.twitter.com/kXG5Hlkti5

Christophe Lecourtier pointed out that "[e]specially here in Martin Place – Sydneysiders and Australians know what means violence, what means terrorism. So we have to stand united in order for that not to happen again, or at least for people to tell the world that their values are stronger than violence, stronger than murder, stronger than terrorism."

On Thursday, over a thousand people participated in a vigil held in Martin Place for the victims of the attacks in France, the Sydney Morning Herald reported. They held a minute of silence timed to correspond with a similar event in Paris.

The majority of those participating in both events carried signs, saying "Je suis Charlie", a rallying cry of support for the victims of French attacks.

During the vigil, Christophe Lecourtier said that "[d]emocracy is not something weak. It is something strong," as quoted by the SMH. "We shall never surrender against terror and terrorism," he added.

"I hope it is the last time something like this happens," said Coralie Dagostino, 22, who grew up in Paris, not far from Charlie Hebdo's office. "I'm glad to see a lot of French people here tonight. We must not be afraid," she said.

A sea of #JeSuisCharlie signs held by French nationals in Sydney for #CharlesHebdo victims. pic.twitter.com/YC6rpzAyiZ

On Wednesday, Cherif and Said Kouachi killed twelve people at the office of Charlie Hebdo in Paris, including cartoonists, the editor and police officers outside the building. On Friday, Amedy Coulibaly, took several people hostage at a kosher store, Hyper Cacher, near Porte de Vincennes in Paris. Four of them died before officers stormed the store.

The events of the three days left a total of 17 people dead in France. Their deaths will be mourned Sunday in a massive unity march in Paris. Similar events will be held all over the world.

Hundreds Rally in NYC in Solidarity With Victims of French Attacks: Reports