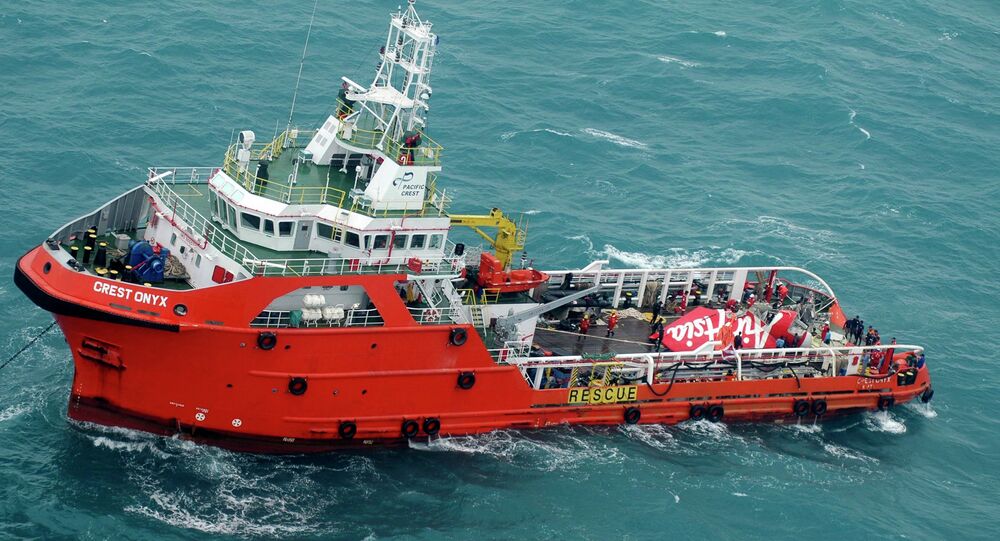 Three search vessels receive signals coming from a location a kilometer east of the place where the tail was found. Divers will be sent to look for the source of these signals.

"They have actually picked up signals coming from a location around a kilometer east of the location where the tail was found," Supriyadi was quoted as saying by the DetikCom news website.

Indonesia's operations director said they were going to send in divers to look for the source of these signals. This comes after Indonesian and Russian rescuers brought up a large chunk of the plane's rear from the depth of 35 meters (almost 115 feet).

© AFP 2021 / ANTONIO P. TURRETTO
US Navy Ship Combing Seafloor for Signs of AirAsia Wreckage
The fuselage attached to the jet's tail was a tangle of wires and contained no black boxes. Supriyadi confirmed that flight recorders were still missing.

AirAsia flight QZ8501 was en route to Singapore from Indonesia's Surabaya when it vanished off radars 15 days ago. There were 162 passengers and crew on board the aircraft. The beacons continue to emit signals for approximately another 15 days before the batteries die.

The cause of the airliner's crash is still unknown. Russian experts are helping Indonesia to locate and retrieve the wreckage. A total of 48 bodies have been recovered and flown to Surabaya so far, with 29 crash victims already identified.