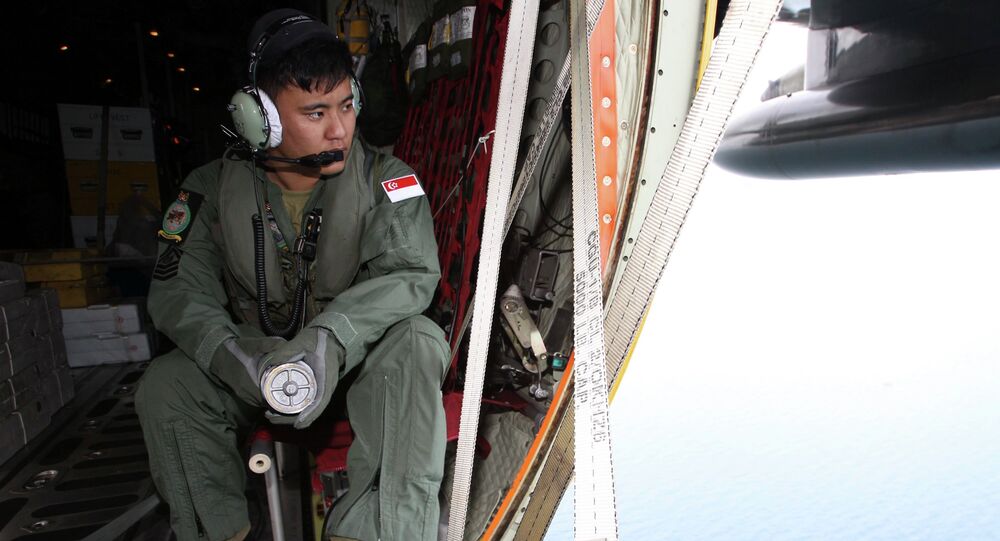 The AirAsia passenger plane which went missing on Sunday morning with 162 people on board has probably sunk to the bottom of the sea, Indonesian rescue officials told reporters on Monday.

"(Because) the coordinate that was given to us and the evolution from the calculation point of the flight track is at sea, our early conjecture is that the plane is at the bottom of the sea," Bambang Sulistyo, head of Indonesia's national search and rescue agency, told reporters Monday.

Searchers still don't know the exact location of the plane, he said, and may need help from other countries with an underwater search.

Transport Minister Ignasius Jonan said the search was focused on an area 70 nautical miles square between the island of Belitung, off Sumatra, and Borneo island., according to Reuters report.

© REUTERS / Joko Sulistyo/Antara Foto
Navy soldiers work on a map of Indonesia monitoring all Navy ships from Indonesia, Singapore, and Malaysia involved in the joint search and rescue operation for AirAsia flight QZ8501 at a navy base on Batam island, December 29, 2014

He said the sea was only 50 to 100 metres deep in the area, which would be a help in finding the plane. Ships were hunting around the clock but aircraft would suspend their operations at dusk, he added.

Earlier on Monday, an Indonesian Air Force helicopter spotted two oil slicks in the rescue zone. However, no further information about the oil slicks was available and no-one has connected them to the AirAsia plane crash.

© REUTERS / Lianhe Zaobao/Singapore Press Holdings
AirAsia Indonesia Welcomes Int'l Assistance in Search for Missing Jet
The missing AirAsia plane, an Airbus A320-200, was flying to Singapore from Surabaya, Indonesia, with 155 passengers and seven crew members on board. It lost contact with air traffic control on Sunday morning.

The missing plane had not transmitted any distress signal before disappearing from the radar.

“We will review AirAsia Indonesia to make sure its performance can be better in the future,” The Guardian quotes him as saying.

“Much will be reviewed in terms of its business operations and in terms of the air transportation business, so that there are safety improvements,” he added.