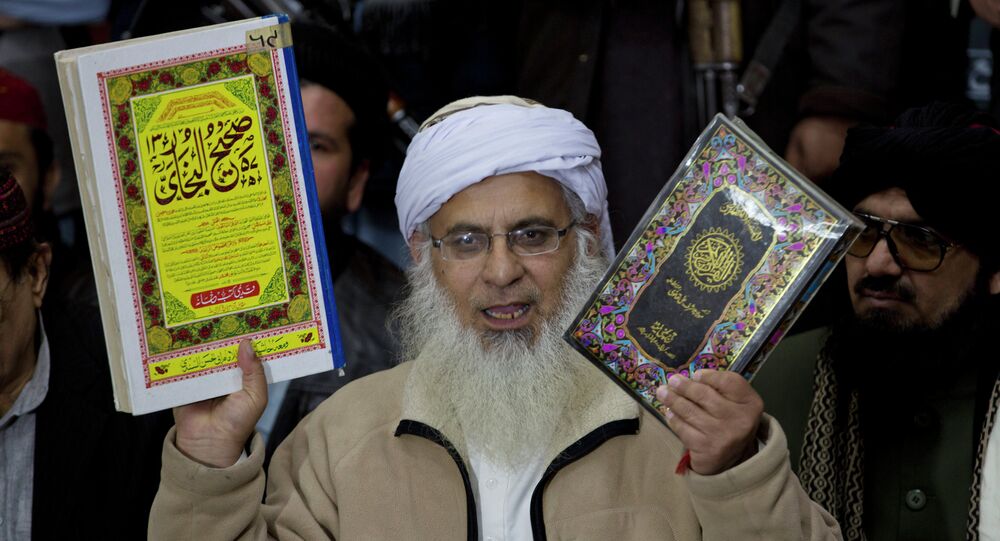 A court in Islamabad on Friday issued an arrest warrant for a Red Mosque cleric Maulana Abdul Aziz.

MOSCOW, December 27 (Sputnik) — A Pakistani court has issued an arrest warrant for an Islamic cleric Maulana Abdul Aziz, who refused to condemn the killing of schoolchildren in the Peshawar’s terror attack, after he allegedly threatened people criticizing him, reports AFP.

Lawyer-turned-activist Jibran Nasir, who led the protest, has stayed determined, despite receiving a threatening call from a Tehreek-e-Taliban spokesman, Ehsanullah Ehsan.

“We have requested the police to conduct a focused investigation…then we will know whether to continue chanting slogans or to celebrate,” he told The Express Tribune.

“This is a story of the will of the common man. This is a common man’s protest against all the rogue clerics who use and manipulate the name of Islam for their own interests,” he added.

© REUTERS / Fayaz Aziz
Mourning Across Pakistan Following the Peshawar Massacre
The cleric refused to condemn the Peshawar attack on a television show and in a later sermon, Aziz further linked the Peshawar massacre to the army’s “un-Islamic” operation against militants in the North Waziristan tribal district.

“O rulers, O people in power, if you will commit such acts, there will be a reaction,” he told his worshippers. His words further aggravated the public, who accused him of being a Taliban sympathizer.

© REUTERS / Andrew Gombert
No Difference Between Good and Bad Taliban: Pakistani Prime Minister
A police official in Islamabad told AFP, “Police has received the court order and we are trying our best to implement it.”

A spokesman for the Red Mosque, Hafiz Ihtesham Ahmed, on the other hand, accused civil society activists of pressurizing police to register a case against Aziz.

“This case has no grounds, so we will resist any move to arrest Maulana Abdul Aziz,” Ahmed said, reports AFP.