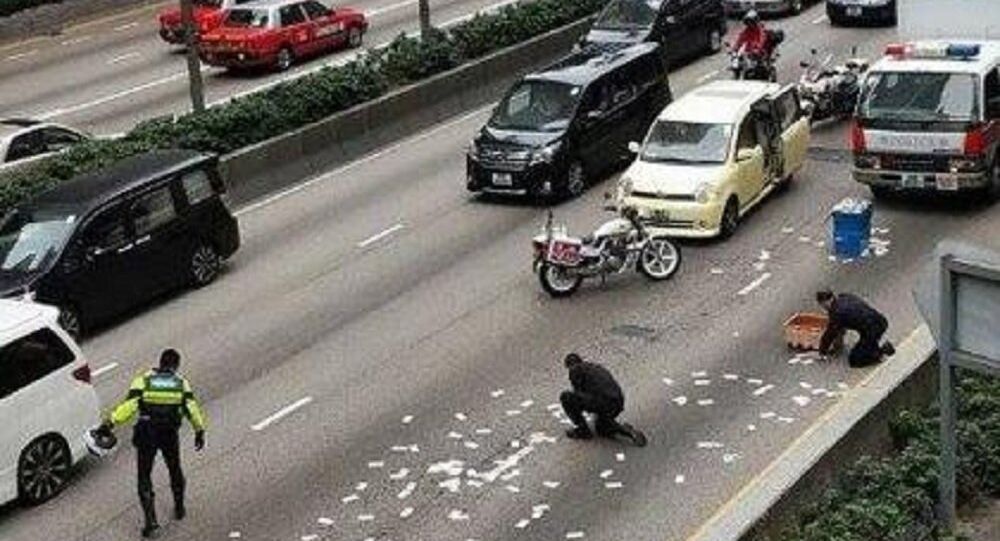 © AP Photo / Vincent Yu
"Occupy Central" Protest is Over: Hong Kong Leader
MOSCOW, December 24 (Sputnik) – An armored cash transport vehicle spilled its load of banknotes onto a Hong Kong highway on Wednesday, resulting in a scramble of onlookers grabbing bundles of notes which fell onto the road.

"I saw a lady with 10 of them, easily. She looked like a very regular Hong Kong lady. She had an armful of bricks of cash — it was as much as she could carry. She just disappeared into the depths of Wan Chai," a witness told the South China Morning Post.

Which Christmas greeting would you prefer to hear?
Voted: 32
All polls

"At first people did nothing, then one person went into the road," the man told the newspaper, adding, "You couldn't make it up. There were 20 or 30 people picking up cash from the road on Christmas Eve." A video of the incident posted to the paper's website shows people crouching among stopped cars grabbing money from the tarmac.

Traffic Resumes in Downtown Hong Kong After Main Protest Site Cleared
According to the police, the van was carrying a total of HK$525 million (US$68 million) in cash, of which HK$35 million was spilled by the van after an accident on the city's Gloucester Road. Law enforcement said that around $20 million has been retrieved so far.

"I would like to take the opportunity to appeal to every member of the public that if they picked up any money to handover to any police officer or any police station as soon as possible," said police superintendent Wan Sui-hung, the SCMP reports.

According to Radio Television Hong Kong, superintendent Sui-hung warned that people who took the money could be facing up to 10 years in jail, but that so far no arrests have been made. The banknotes are said to have been newly printed, and investigators are set to try and trace the trail of the missing cash.