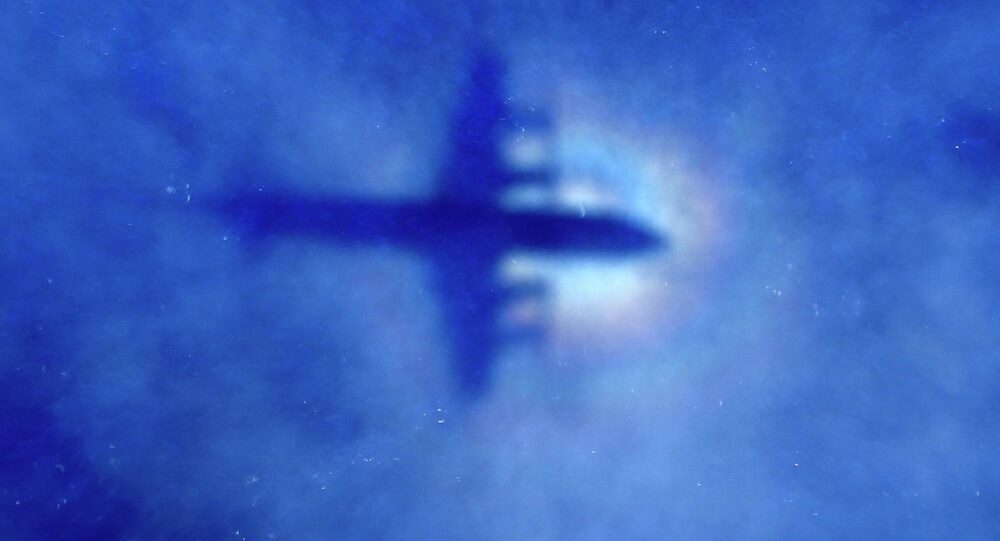 "In an article for French magazine Paris Match, he [Marc Dugain] claimed that the Boeing 777 crashed nowhere near where international search teams have been combing the ocean for wreckage, but near an American military base in the British territory of Diego Garcia," the Independent reported.

The disappearance of the infamous flight heading to Kuala Lumpur from Beijing on March 8, 2014 with 239 people on board, is unlikely an accident, Marc Dugain claims. The expert points to the fact that in "our technological world," a 63-meter aircraft simply cannot vanish without a trace.

Google Maps
Google Maps: Diego Garcia in the lonely Indian Ocean. A close-up of the British island below

He believes that the Boeing 777 was remotely hijacked over the Indian Ocean, near the American Navy base on Diego Garcia island, by US-backed hackers, apparently in order to prevent a 9/11 style attack, and shot down.

"It's an extremely powerful military base. It's surprising that the Americans have lost all trace of this aircraft. Without getting into conspiracy theories, it is a possibility that the Americans stopped this plane," Marc Dugain said in an interview with France Inter, as cited by the Local.

Remarkably, the US has repeatedly dismissed reports that the aircraft flew over Diego Garcia island. Dugain travelled to the region and interviewed locals about the alleged crash. "I saw a huge plane flying at a really low altitude above us," a fisherman told him, describing the aircraft painted in Malaysia Airlines colors.

In an interview to Paris Match, the expert notes that according to the Maldives local media an object, believed to be a Boeing fire extinguisher, was found on Baarah island's beach shortly after the mysterious disappearance of the MH370 Flight.

According to Dugain, after the airliner was remotely hijacked and redirected towards Diego Garcia, a cockpit fire could have forced the crew to turn off the plane's electronic equipment. Thus, the infamous flight vanished from the radars. Apparently, all 239 passengers died from asphyxiation, while the aircraft was flying on autopilot until running out of fuel and falling down into the sea, the expert suggested.

This operation, allegedly carried out by the US military, was carefully covered up, claims Marc Dugain. This suggestion sheds some light on the fact that the Americans, equipped by the most sophisticated equipment failed to find any trace of the huge 63-meter airplane, as well as the secrecy surrounding the aircraft's cargo.

© REUTERS / Rob Griffith
Search for Missing MH370 in Priority Zone Likely to End May 2015: Reports
Mr. Dugain also pointed out he was already "warned" by a British intelligence officer against "taking risks" while trying to find out the truth about the vanished MH370.

Marc Dugain has become the second senior airline industry official, who suspects there is a conspiracy behind the Boeing's disappearance, News.com.au, the Australian media source notes, referring to Emirates airlines CEO Sir Tim Clark's statement, made in October, 2014. Tim Clark voiced his growing skepticism regarding the complete lack of aircraft debris and "the electronic satellite 'handshakes' which positioned the plane in the southern Indian Ocean," the media source emphasizes.

Those who know the truth are unwilling to expose it, believes Marc Dugain. Still the mystery surrounding the notorious flight MH370 remains.