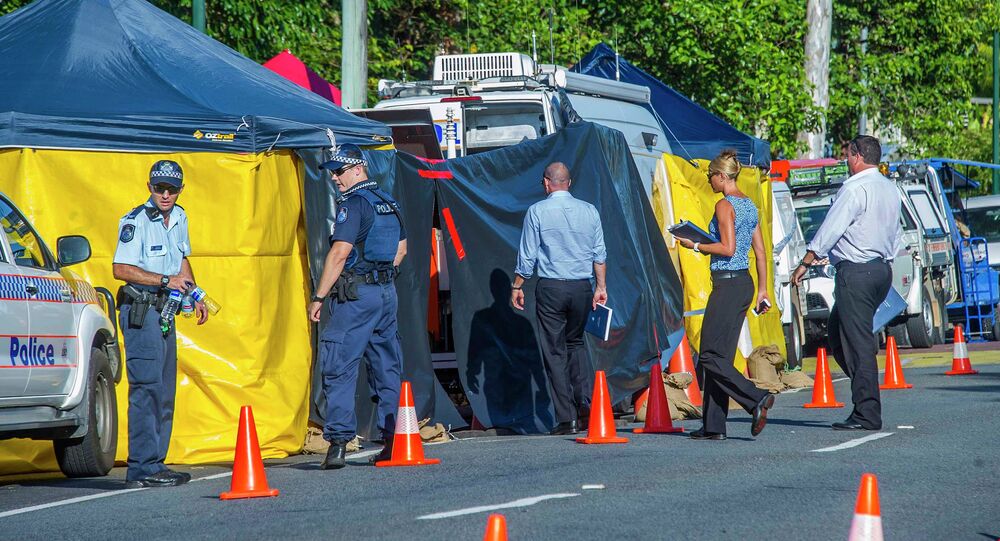 Mother of Seven Slain Children in Australia Charged With Their Murder

A 37-year-old woman, the mother of seven of the eight children who were murdered in Australia on Friday, has been charged with killing them.

© REUTERS / Stringer
Australian Police Arrests Mother of Children Stabbed in Cairns
MOSCOW, December 21 (Sputnik) – The mother of seven of eight children who were killed in the Queensland city of Cairns, Australia was charged with their murder on Sunday, the Queensland Police Service said in a statement on its website.

“All of the family has been advised (of the charges). This is very raw and it is a very emotive  time for everybody. The family is deeply upset but the community is pulling together," AFP quotes Cairns detective inspector Bruno Asnicar as telling the reporters.

Northern Region detectives have charged a woman in relation to the deaths of eight children in a house in Manoora… http://t.co/Gw5a4bZULj

© Flickr / Mr Korn Flakes
Mass Stabbing in Australia Leaves Eight Children Dead: Reports
The 37-year-old, a native of Erub Island in the Torres Strait off the northern coast of Queensland, has been named in the local media as Mersane Warria. She was arrested by the police on Saturday, has been charged with eight counts of murder and remains in custody.

On Friday morning, Queensland police were called to a suburban home in Cairns. Upon arrival, they discovered the bodies of eight children, aged between 18 months and 15 years, and a wounded woman. The woman, Warria, was confirmed to be the mother of seven of eight children; the eighth child was her niece.

Although someone has been charged, the investigation continues. Police expect to be at the house for some time. #Manoora

Later, Warria appeared before a magistrate at a bedside hearing at a hospital, where she remains under guard while receiving treatment for her injuries.

Police said the woman, who is the mother of the seven young children and the aunt of the teenage girl, who would have turned 14 this Sunday, has sustained injuries that are not life-threatening.

© AP Photo / Graeme Bint
Australian Authorities Offer Condolences Over Cairns Children Slaughter
There will be a formal hearing in a Cairns court on Monday, with police set to oppose bail.

The cause of death of the children has not been revealed but officers say they were looking into various scenarios, including suffocation.

“We are considering that (suffocation) and that’s why it’s taking a bit of time," AFP quotes Asnicar as saying earlier on Sunday.

Police previously said that knives were found at the house where the bodies were discovered.

Detective Inspector Bruno Asnicar says the autopsies of the children who died should be completed by this afternoon. #Manoora

Autopsies on the children were continuing and will be completed late Sunday at the earliest, according to the police.

Police described it as the most tragic episode in their career.