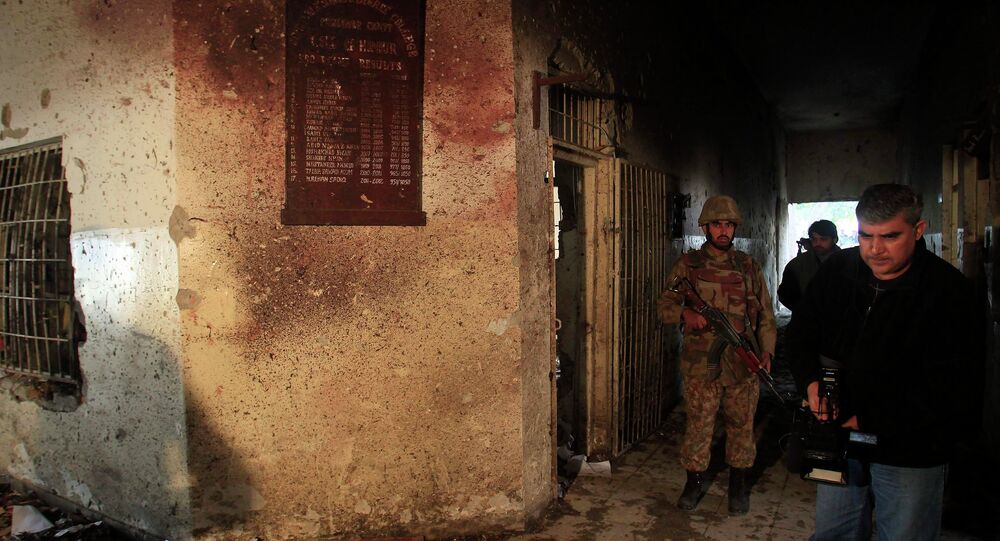 Protests and prayers were held across cities of Pakistan on Wednesday in public outrage over the Taliban school massacre which killed 148 people, mostly children.

MOSCOW, December 17 (Sputnik) — Protests and prayers were held across Pakistan on Wednesday, in outrage over the Taliban school massacre which killed 148 people, mostly children, reports CCTV.

The attack at the Army Public School and College in the city of Peshawar on Tuesday was the deadliest the country had ever seen and horrified a nation already tired from endless militant attacks.

People spoke of their shock at the brutal slayings in Peshawar, where children and teenagers were gunned down by the terrorists.

In different cities across Pakistan, protests and prayers began early on Wednesday, as member of multiple groups joined the demonstration. Prayers were held in schools, colleges, universities and offices across the country.

According to Babar Khan a political science student residing in Lahore, “We find this attack deplorable and inhuman. They want to destabilize our country. As a Pakistani, I can tell you that while our hearts bleed, while every one of us mourns, we are not afraid; instead, we are only angrier.”

Another student, Sahar Balouch stated, “We had a candlelight vigil at the national defense university, today at 5:30 pm. Students, officers and faculty members of ISSRA and NDU were present.”

A citizen of Lahore and ex-government official, Khalid Mahmood, expressed his derision by following and forwarding the message via social media networks saying that this is the time for action and demanding the government to announce the hanging of the convicted terrorists. He said, “Our slogan for the campaign against the terrorists is: An eye for an eye. Hang them all. Hang them high.” Similar slogans were seen on Twitter and other social media.

There should be a public hanging of all the arrested terrorists. Hang them all, hang them high.

A number of twitter hashtags appeared such as #PrayForPeshawar, #UniteAginstTerrorism and #WeStandWithPakistanArmy where people are expressing their sorrow and anger to get justice for the death of children.

Following the attacks the foreign governments expressed their mourning by issuing statements condemning the attacks. Russian Embassy in Islamabad, Pakistan, issued a statement saying," Russia strongly condemns the barbaric act carried out by the terrorists who do not hesitate to commit senseless and cruel attacks even against children. We hope that masterminds and perpetrators of this inhuman act will face the punishment they deserve. We would like to extend condolences to the friends and relatives of those killed and wish a speedy recovery to the injured. We support the measures undertaken by the government of Pakistan aimed at the extermination of the hotbeds of terrorism. We expect Pakistan to continue with its uncompromising struggle to eliminate the extremist infrastructure. Russia is ready to proceed with assisting the Pakistani government in its efforts to fight terror'.
...
Reddit
Google+
Blogger
Pinterest
StumbleUpon
Telegram
WhatsApp
102
Topic:
Peshawar School Attack in Pakistan (36)