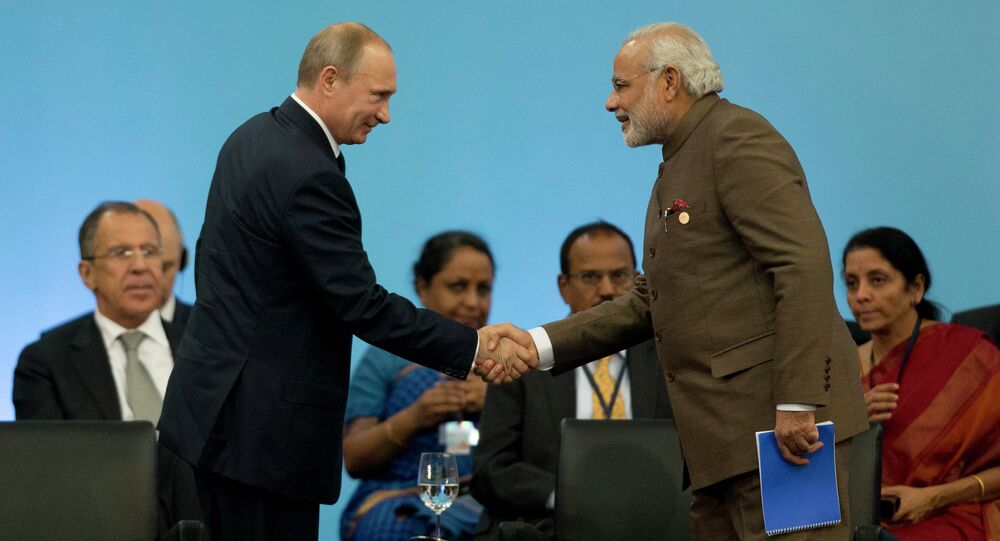 The India-Russia Annual Summit, which will take place in the Indian capital on December 11-12, is expected to bring a new level of international cooperation and closer economic ties between the two countries.

NEW DELHI/MOSCOW, December 9 (Sputnik), Nastassia Astrasheuskaya — Russian-Indian relations are expected to get a fresh boost this week, when the countries' leaders meet for a summit in New Delhi to discuss mutual trade and energy deals, as Russia continues to strengthen its ties with the East amid Western sanctions.

© Sputnik / Michael Klimentyev
Putin: Russia Waiting for India to Choose Site of New NPP, Ready to Build More
«[It is] the time when expectations are high in light of the forthcoming visit of the Russian president. Visiting India now is of global significance. All over the world, the revival of economies is still not happening. The economies with buoyancy are all in the emerging world. India is showing more than a 5-percent growth. This is a happening place," India’s Minister of Commerce and Industry Nirmala Sitharaman said at a meeting with Russian journalists in New Delhi last week.

The India-Russia Annual Summit, which Moscow and New Delhi have taken turns hosting since 2000, will take place in the Indian capital on December 11-12, and will be the first for India’s Prime Minister Narendra Modi, who assumed office in May. He has met Russia’s President Vladimir Putin twice since then — at the BRICS (Brazil, Russia, India, China and South Africa) summit in Brazil last summer, and at the G20 meeting in Australia in November.

Indian officials described the leaders' first meeting as «a very warm and friendly conversation," and experts anticipate a continuation of the rapport this week.

© Сollage by RIA Novosti
BRICS – a New Step in Global Politics?
«Modi and Putin are similar age-wise and view-wise, they are both nationalists in the best sense of the word. [In India], everyone knows that Russia is the closest friend," said Arun Mohanty, professor and expert on Russian and Central Asian Studies at Jawaharlal Nehru University (JNU) in New Delhi.

«Russia is our strategic partner number one. Although we haven’t had strong exchange lately, maybe we will make up for this loss during this summit," Mohanty added.

The summit is expected to focus on economic partnerships for the next decade, with more than 15 deals to be signed in the fields of defense — where Russia and India have had the strongest cooperation to date — and in nuclear energy, trade tariffs and banking, Ajay Bisaria, Joint Secretary Eurasia of India’s Ministry of External Affairs, said at a briefing last week.

During the summit, Putin will hold talks with India’s President Pranab Mukherjee, while the approximately 200-strong delegation of Russian entrepreneurs and officials are to meet businesses and other potential partners.

After the United States and the European Union imposed several rounds of sanctions against Russia for its alleged involvement in Ukraine’s affairs earlier this year, Moscow turned eastward in search of partners. India has long had friendly relations with Russia but economic cooperation has not kept pace with the good will between the countries.

India will not back sanctions against Russia http://t.co/pn0zn88e57 via @timesofindia

«We have not really been comfortable in the area of sanctions. Reviving many of those initial years of contact that we had is a possibility of making India an economic partner," India’s commerce minister said.

In August, Moscow imposed a one-year ban on US and EU food import and sought to increase imports from Latin America and Asia, giving New Delhi a green light to step up its participation in a share of Russia’s import market.

«The Indians say directly that they see the situation for the development of the relations between Russia and India. They tie their hopes with us in this sanctions situation, they want to trade more fruit and vegetables," Russia’s Ambassador to India Alexander Kadakin said.

India’s external ministry announced last week it planned to start exporting buffalo meat to Russia. Rospotrebnadzor, Russia’s veterinary regulator, has approved the deal, which is expected to be finalized at the summit.

To increase consistent exports to Russia, however, India must streamline logistics. Currently most goods travel by sea, taking nearly a month to reach Moscow. To lessen transportation time and expense, New Delhi is considering an intermodal land corridor through Iran and Afghanistan, bypassing Pakistan, although no formal proposals have been made.

It is generally accepted that India has a long way to go to efficiently compete in the market of the world’s largest country. Although India has demonstrated its support of Russia by refusing to impose sanctions and refraining from criticizing its reunification with Crimea, China has been more outspoken in its support for the Kremlin in major international issues and more pro-active in signing large-scale strategic agreements.

«Russia's closer relationship with China is a problem for India. India has been more cautious about what Washington will think about its actions. That is why Russia went to China, and China milks Russia in every way it can," JNU’s Mohanti said.

Russia’s trade with China, for instance, exceeded that with India tenfold in the first half on 2014, according to Russian statistics service, Rosstat.

Although it was with China that Russia signed the historic $400-billion CNPC-Gazprom gas deal for 30 years in May, India wants to have its share of lucrative energy projects.

No amount of oil, however, can satisfy the energy needs of India’s 1.3-billion-person population, the second largest in the world, which leaves the country open to the development of nuclear energy. This places the construction of the joint Indian-Russian Kudankulam Atomic Power Plant at the center of the upcoming talks.

© Sputnik / Evgeniy Bezeka
Russian, Indian Nuclear Experts to Hold Consultations on Cooperation
The Nuclear Power Corporation of India and Russian Nuclear Agency Rosatom launched the much-delayed joint construction of the Kudankulam plant, located at the very southern tip of the Hindustan peninsula, in 2002. Unit 1 of the plant reached full capacity in July, and Unit 2 is stated to be nearing completion. The two agencies are expected to seal agreements for construction of Units 3 and 4 this week, although they have not yet reached an agreement on the total number of units, estimated to be between 16 and 22. Russia faces competition from other countries for a share in the project.

«The United States wants a share in this [nuclear] market, and France wants some, too. If Russia steps up, the United States may become upset as they brought Nuclear Suppliers Group (NSG) —for [India]," Professor Mohanti said, referring to the US president sponsoring India’s inclusion in the international group of countries promoting non-proliferation of nuclear weapons.

Unlike Moscow, which invests about $4-5 billion in India’s nuclear energy, Paris and Washington have so far refrained from nuclear construction in India largely due to a much debated liability law, which India recently passed to protect itself from responsibility for possible accidents at plants built by foreign companies. Russia takes the position that the user, not the manufacturer should take the responsibility.

«The passed law stands in the way of doing business in India. It stands not only in our way, but in the way of the French, the Americans. But neither of them have started the construction yet," Kadakin said, adding that Russia envisaged not only completing Units 3 and 4, but also Units 5 and 6 at Kudankulam.

«When there is desire to find the way out of a situation with [India], we [will] find it," Kadakin said.

Russia Invited to ‘Make in India’

A growing outsourcing hub in various areas including IT and communications, India currently serves as a base for low-cost production for foreign companies, but very few of these are Russian.

Promoting Modi’s ‘Make in India' campaign, aimed at encouraging foreign companies and investors to shift production to India, officials at the summit will invite Russia to take advantage of the country’s numerous, skilled and, most importantly, inexpensive labor.

«I invite a lot of investment from Russia for those areas, to which India has been giving a market over the years for Russia to export. But I think it would be better for Russia to produce here and sell here instead of producing in Russia and then exporting," Sitharaman said, citing examples of existing successful cooperation with several Russian companies, such as Sistema.

Sistema, a Russian telecommunications, oil, pharmaceuticals and utilities conglomerate, has shown interest in investing in the creation of «smart» cities in India. Modi’s government has pledged to invest Rs 7,000 crore ($1.1 billion) in 100 smart cities.

Russia’s diamond miner ALROSA, the world’s leader by volume, which signed a Memorandum of Understanding (MoU) with the Gem & Jewellery Export Promotion Council of India (GJEPC) in April, is also exploring opportunities to partner with Indian companies working in diamond cutting and polishing.

«Diamonds is one direction where we can be successful. India processes 70 percent of the world’s diamonds, but they get here through Europe. Now we are talking about direct supplies from Russia to India. A direct hub in Mumbai is being discussed," Professor Mohanti said.

Other deals up for discussion at the summit may include partnerships in medical tourism, industrial parts production, the development of Delhi-Mumbai industrial corridor (DMIC).