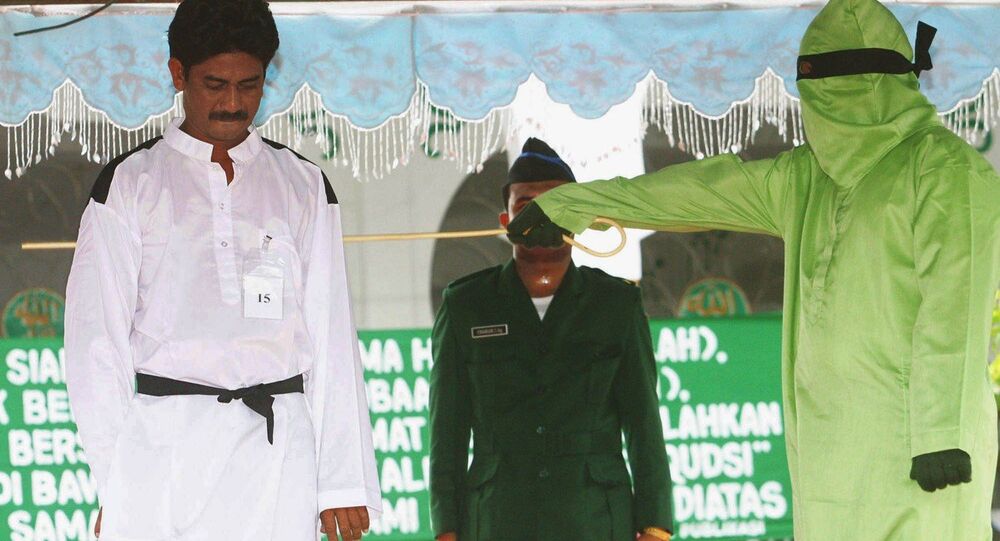 The Indonesian province of Atjeh has implemented a strict rule of the Sharia law, triggering controversy over possible human right violations.

MOSCOW, December 3 (Sputnik) — Authorities in the Indonesian province of Atjeh have enacted Sharia Islamic law in the conservative region, causing possible human rights violations of the Christian minority, as well as sparking concerns of torture, possibly violating the nation’s Constitution.

The cradle of Islam in the Asia-Pacific, Indonesia’s province of Atjeh, is now living under the Sharia law by the decision of the local administration. Atjeh is one of 34 provinces in Indonesia and is located in the far-nothwest part of the most populous Muslim nation in the world. In Atjeh, Muslims comprise 98% of the province’s nearly five million strong population, whereas in Indonesia on the average about 87% of population are Muslims, with 10% being Christians.

© REUTERS / Stringer
IS Beheads Its Fighters in Accordance With Their Interpretation of Sharia
Atjeh formally has been under Islamic law since 2001, but it was not until this September that it was decreed everyone must abide to the religious criminal codex, to include the roughly 90,000 non-Muslim minority population. From now on, many formerly allowed activities are prohibited, including fornication, sodomy, pre-marital sex, possession of alcohol, etc.. Unlawful activities are punishable with either prison terms, public flogging or severe fines.

“Victims of caning experience pain, fear and humiliation, and caning can cause long-term or permanent injuries. The Indonesian government must act to stop these punishments, which constitute cruel, inhuman or degrading treatment and often amount to torture,” Amnesty said in a statement.

© Sputnik / Alexander Yelistratov
Egypt Presidential Candidate Seeks Constitution Based on Sharia Law
The head of the province’s Catholic community, Father Hermanus Sahar, harshly criticized the introduction of the Sharia law in Atjeh, saying that “no Catholic has been punished for violating sharia law, and I hope that doesn't change in the future.”

The way of life in Atjeh is also changing, even for Muslims, who now have to obey the strict norms of Sharia. Interactions between men and women in public must be minimized and prayers must be strictly adhered to several times during the day.

Religious police are fervently enforcing the new norms, bringing people to mosques on Fridays. Modern forms of art, like punk rock, are prohibited. Women are not allowed to wear any sort of trousers and must wear a hijab, covering their hair completely. Tight clothing and improper haircuts are prohibited for both men and women.

The Christian faith is also under pressure now, as Sharia law prohibits building new places of worship other than the Muslim ones.

Son of a Carpenter to Lead Indonesia