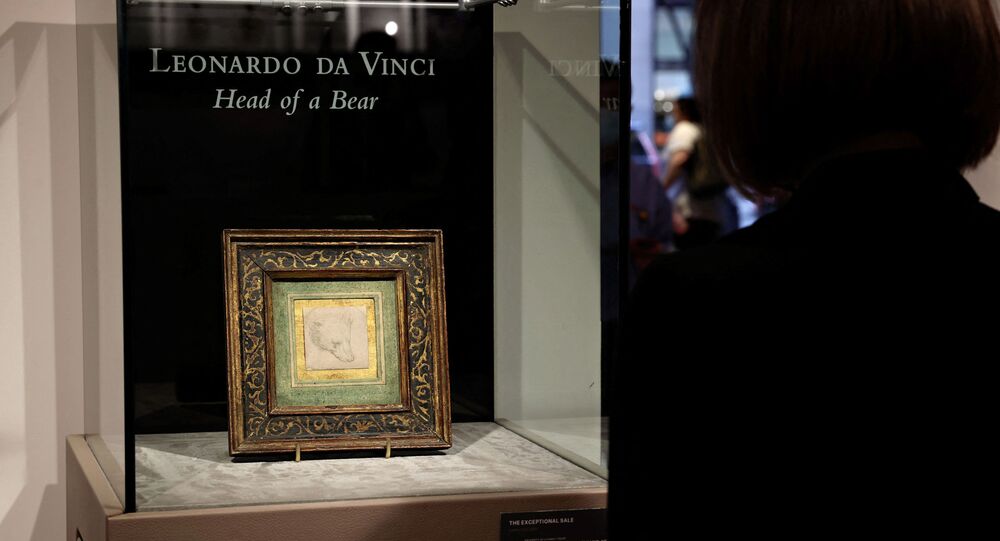 Da Vinci's Drawing of Bear's Head Gets Auctioned Off at Record-Breaking Price of $12.2Mln - Report

The sketch, titled "Head of Bear" and drawn on a beige square piece of 7.62 cm (3 in) paper, broke the previous auction record for a drawing by the Italian Renaissance painter, which was set in 2001 when his "Horse and Rider" was purchased for more than 8 million pounds (or $11.5 million).

The tiny silverpoint study, which is thought to date from the early 1480s, was part of Christie's summer "Exceptional Sale" of high-value historical works of art selected from a variety of collecting categories.

The painting is a silverpoint drawing on pink-beige paper depicting a sketch of a bear's head, as the title suggests. And Leonardo da Vinci's signature is written in the bottom-right corner.

It was purchased by an undisclosed "family trust" at Christie's auction house and is the most expensive sale of da Vinci's work on paper. Before being purchased, the painting was on display in New York, Hong Kong, and London.

According to the Daily Mail, Ben Hall, Christie's New York's old master paintings chairman, hailed the drawing as "one of the most important works from the Renaissance still in private hands" before the auction.

"The work has been owned by some of the most distinguished collectors in the field of old masters across many centuries, not least the present owner who has owned it since 2008," he is quoted in the report about the record-breaking sale as saying. "It has been admired around the world whilst shown by prestigious museums and Christie's is honored to bring this Leonardo to the market this season."

However, Jean-Luc Baroni, a London and Paris-based dealer of museum-quality old master drawings told the NYT that he believed the price for a more than five centuries old drawing is "absurd." If Baroni had been asked to value the work, he reportedly said he would have put it at around $2 million.

"You’re buying a name. It's nothing to do with the love of drawings," the art dealer stressed. "Ok, it's a Leonardo. But it's so tiny. It's a postage stamp."

© AP Photo / Kirsty Wigglesworth
Da Vinci May Be the Author of 'Salvator Mundi', Allegedly Owned by Saudi Crown Prince, Report Claims
Another international auction house Sotheby's sold a possible 20th-century replica of the "Mona Lisa" for 378,000 pounds at a day auction of ancient masters on Thursday, only hours before Christie's sale of the artwork, the NYT noted. It was reportedly considered to be worth just 8,000-12,000 pounds at the time.

According to the auction house, the drawing of a bear's head was once owned by British painter Thomas Lawrence, who passed it on to his dealer Samuel Woodburn after his death in 1830. And he sold it for 2.5 pounds in 1860.

Another record was reportedly set in 2017 when Saudi Arabia's crown prince Mohammed bin Salman allegedly paid $450.3 million for Salvator Mundi, a representation of Christ as universal saviour, widely attributed to da Vinci. Some art experts, however, assume that separate parts of the composition do not belong to da Vinci.

The so-called "male Mona Lisa" has not been shown in public since it was purportedly purchased by the Saudi royal family at a Christie's auction.