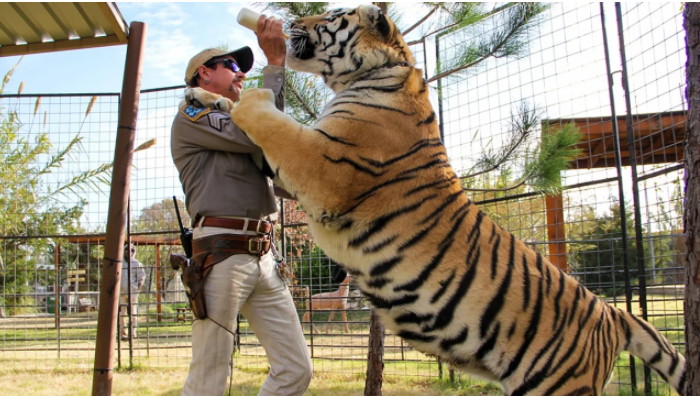 Netflix star Joseph Maldonado-Passage, known professionally as Joe Exotic, is an eccentric Oklahoma-based former zoo owner, sometime country singer and failed US presidential candidate who was convicted last year and subsequently imprisoned for document forgery, the murder of tigers and the attempted assassination of an animal rights activist.

Joe’s husband, Dillon Passage, announced in an Instagram post on Friday that the two “are seeking a divorce” after the zoo keeper received a lengthy prison sentence.

“In November of 2017 I met Joe who was there for me during a difficult time in my life. After just 9 short months he was arrested and, for the last two and a half years, we have been apart. I’ve always stood by his side and will continue to always love and support him,” he wrote.

Dillon cited huge media and public attention after “Tiger King” was released on Netflix a year ago, “something that was completely foreign” to him. He stated that he felt no obligation to explain his breakup with the 58-year-old entertainer. He concluded that divorce isn't easy, but the two both “understand that this situation isn’t fair to either of us.”

“I will continue to have Joe in my life and do my best to support him while he undergoes further legal battles to better his situation,” Dillon said.

In January 2020, an Oklahoma state court sentenced Maldonado to 22 years in prison for forging documents, killing five tigers, and the attempted contract killing of animal rights activist Carol Baskin. The convict denied his guilt and asked the then-US-president, Donald Trump, for a pardon, but did not receive it.

The Netflix docuseries “Tiger King,” featuring Maldonado and his zoo of exotic animals, depicted the entertainer's long-term feud with animal rights activist Baskin, who came out harshly against his zoo. The series became a hit last year, gaining a 64-million-strong audience.