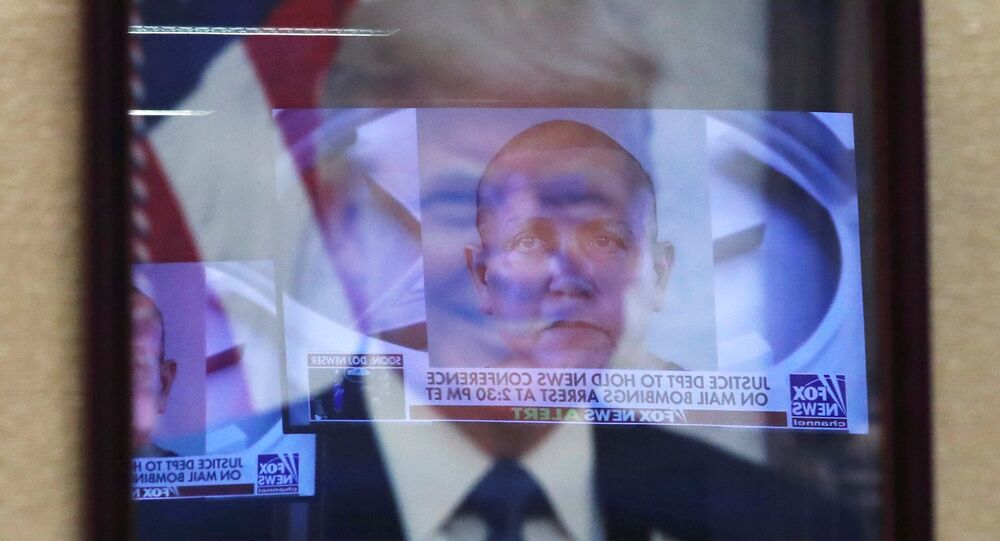 Critics of the US president’s rhetoric blame the mail bomber’s actions on Trump’s calls for violence against Democrats.

Following the arrest of suspected domestic terrorist Cesar Sayoc for sending mail bombs to at least 13 prominent Democratic lawmakers and their supporters, conservative Republicans and their right-wing voter base are struggling to acknowledge that the alleged perpetrator is an avowed supporter of US President Donald Trump, according to APnews.com.

As evidence mounts against Sayoc for violent threats using what the FBI has affirmed "are not hoax devices," many Trump supporters are claiming the crime to be a ‘false flag' directed at steering fence-sitting Republican voters toward Democratic candidates in the upcoming 2018 midterm US elections.

Even the US president, referring lightly to the threat as "this ‘bomb' stuff," according to Latimes.com, sought to distract attention from the severity of what many are calling an act of domestic terrorism at the hands of the fringe right-wing, according to a new report from the Associated Press.

Critics of Republican conservative lawmakers have noted a significant right-wing move to separate the apparent motives of the 56-year-old Sayoc from the actions and behavior of Trump, according to the Washington Post.

"There's no blame. There's no anything," claimed Trump, regarding whether his polarizing commentary calling to "lock up" political opponents may have played a role in inciting violence on the part of his supporters, cited by The Hill.

Regarding his own often flamboyant statements — particularly those in which he labels his political opponents as "enemies of the people," "treasonous" and an "angry mob," Trump was unapologetic, stating: "I think I've toned it down. I could really tone it up," cited by CNN.

A particularly awkward moment in light of last week's bomb threats occurred after South Carolina Republican Senator Lindsey Graham on Friday stated that he hoped that any Democratic opposition to the appointment of Judge Brett Kavanaugh to the US Supreme Court "blows up in their face," according to the Las Vegas Sun.

The suspect, a repeat offender with a long criminal history, is thought to have mailed at least 14 packages containing explosive material to prominent Democrats and their supporters, including Senator Dianne Feinstein (D-CA), California Democratic Representative Maxine Waters, former US presidential candidate and US Secretary of State Hillary Clinton, former US President Barack Obama, Hungarian-born political activist and philanthropist George Soros, and many others.

Trump appeared to offer a rare conciliatory note on Friday, stating that "these terrorizing acts are despicable and have no place in our country," according to the BBC.

But during a Friday night campaign rally in North Carolina, Trump again accused media outlets unfavorable to him as using the terrorist incident to "score political points" against him and his supporters, cited by the Associated Press.

Trump allies, including conservative pundit Lou Dobbs and the president's eldest son, Donald Jr., have employed social media to suggest that the mail bombs were merely a ‘false-flag' hoax created by unnamed operatives in support of the Democratic Party, according to Apnews.com.

Prominent right-wing radio personality Rush Limbaugh, as well as various GOP congressional candidates and Trump's preferred TV show, Fox & Friends, have consistently promoted a narrative suggesting that the mail bombs represent an attempt to assist Democrats at the polls, according to the New York Times.

© Sputnik
Instead of 'Unity,' Political Polarization Deepens After Pipe Bombs

In the wake of revelations that Sayoc is a fundamentalist Trump supporter, the president tweeted at 3 a.m. on Friday that CNN and other news media outlets were suggesting that it was his fault, claiming that they were "ridiculously comparing this to September 11th and the Oklahoma City bombing, yet when I criticize them they go wild and scream, ‘it's just not Presidential!'" cited by CNN.

One explosive package out of those currently identified was delivered to the Manhattan, New York, studios of CNN.

The president has complained that media coverage of the pipe bomb attempts is a distraction from his policy pronouncements, offering that, "maybe [the story about the pipe bombs] can start to disappear rapidly because we don't like those stories," cited by Dailykos.com.