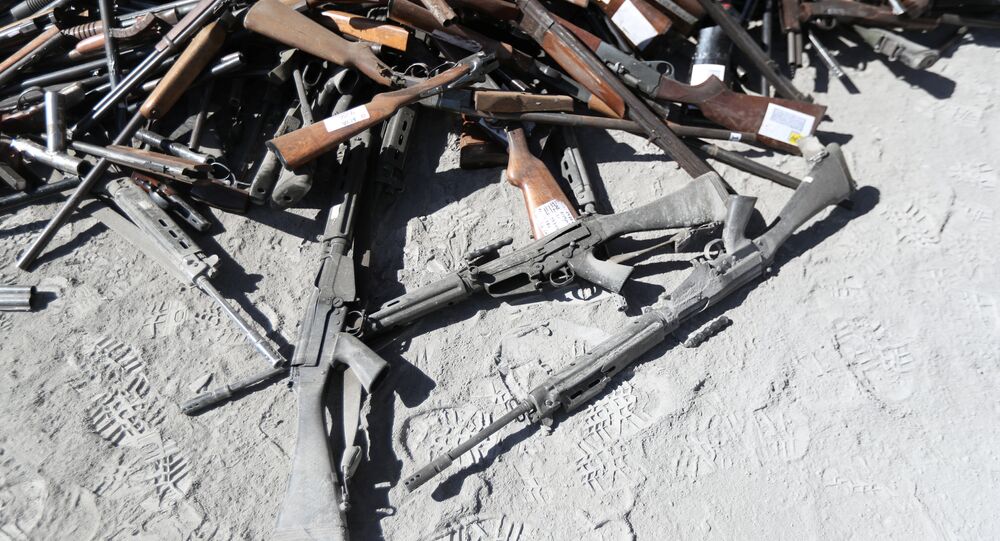 Against the ‘Rotten Empire’: Women’s March on the Pentagon 2018

© CC0
Massive Anti-War Rally Held Near Pentagon (VIDEO, PHOTOS)
Seeking no less than a complete end to all US military actions abroad and the closure of all foreign military bases, the 2018 Women's March on the Pentagon is a bipartisan call to profoundly shrink the Pentagon budget and use the cash to fund healthy and much-needed social programs in America.

Commemorating, in part, the 51st anniversary of the landmark 1967 Washington DC anti-war march, the Sunday, October 21, 2018, Women's March on the Pentagon (WMOP), coincided with sister events in cities across the United States.

WMOP is, according to their website, responding to the consistently growing number of actions worldwide by the military forces of the United States over the past several decades. The group looks to place the political and cultural focus of the country on peace, instead of legacy conflicts in the Middle East, northern Africa and many other locations across the globe, according to Heavy.com.

"Our demands are simple: The complete end to the wars abroad; closure of foreign bases; dramatically slash the Pentagon budget to fund healthy social programs here at home."

Famously referred to by Hip Hop Caucus CEO Reverend Lennox Yearwood as "the Rosa Parks of the antiwar movement," Sheehan is also routinely labeled the ‘Peace Mom,' from a 2006 autobiography describing her transition from housewife and mother to one of the most prominent peace activists on the US stage.

© Sputnik
'US War Drive is Big Business': Women Prepare to March on Pentagon

The United States' contribution to global violence cannot be overstated, according to WMOP and like-minded peace organizations in the US.

With a bloated military budget equaling that of the next seven countries — China, Russia, Saudi Arabia, India, France, the UK and Japan — combined, the Pentagon, through support of both GOP and Democratic lawmakers, is diverting enormous amounts of cash and resources away from desperately-needed programs in the US, including healthcare, education and housing, cited by Commondreams.org.

WMOP details that, beyond simply diverting resources, ongoing US military actions abroad are now seen as acting to decimate entire countries and cultures — peoples that have not directly attacked the US.

The focus of the march, according to the organization's' website, is to bring to center stage a cultural understanding in the country that no woman is free while the US spends trillions of dollars bombing millions of people while simultaneously occupying territories — whether invited or not — in over 150 countries.

In pointing out that the movement is not a "Get Out the Vote Rally for the Democrat half of the War Party," WMOP seeks to draw together all antiwar sentiment in the US under what the group describes as a "principled call to action against the entire rotten Empire."

Sputnik reporter Alex Rubinstein was on the ground for the 2018 Women's March on the Pentagon and was able to speak to organizer Cindy Sheehan and director Bonnie Caracciolo.

Sputnik: Is the march primarily addressing US wars overseas as a women's issue?

Sheehan: "Women around the world are being occupied by US imperialist forces or countries that the US are supporting, [like] Israel and its genocide against Palestinians, in Gaza, particularly."

"We know that the United States is supporting Saudi Arabia and its absolutely horrible, incomprehensible, destruction of Yemen, where tens of thousands of people are dying and millions are starving at this moment."

On gender diversity in the US military:

Sheehan: "We don't like Trump, but we don't like Trump for the same reason that we didn't like Obama and Bush. They are representative of the most evil, violent, racist and sexist [people] in [the US] empire, if not in history."

"When Trump was first elected, my first thought was, ‘well, maybe the movement will be revitalized,' even though I feel that the movement was very hypocritical because they were against the war in Iraq and Afghanistan while Bush was president, but not against those wars when Obama was president, or his destruction of Libya, or further incursions into Africa, Syria, Somalia and not ending the wars in Iraq and Afghanistan."

On Washington DC and the political will for peace:

Sheehan: "The Democrats are just as bad as the Republicans."

"We have to take these forces who have separated from the Democrat and Republican parties and funnel that energy more positively."

Sputnik: How does the peace movement coincide with your experience as an American with a family?

Bonnie Caracciolo: "I don't want my kids to go to the military. We need to keep our kids out of there. We all need to take a big hard look at where our money is going."

"The suicide rate among returning veterans is absolutely over the cliff. Also, if you look at these refugee streams, they are women and children that are suffering from every angle. So, [war] is a women's issue."

"It always absolutely has been a women's issue. We want our sons and other brothers and our husbands and our uncles to be with us on this, because it is everybody's issue, ultimately."

‘What We Have to Do’: Senate Passes Whopping $717 Billion 2019 Pentagon Budget