US ‘Most Successful Christian Supremacist’: VP Pence Bathes in His Faith

US Vice President Mike Pence, responding to a critical new biography referring to him as a ‘Christian supremacist,’ again turned to his religious belief system to address allegations of kowtowing to corporate interests and myth-based systems of belief.

"The Bible says count it all joy when you endure trials of many kinds," drawled Pence, according to the Christian Broadcasting Network (CBN) on Friday.

"Any time I'm criticized for my belief in Jesus Christ, I just breath a prayer of praise," the second-in-line to the US presidency added, cited by Newsweek.

The book asserts that Pence is currently operating as a "kind of replacement president" who — following what most Americans see as the inevitable departure of the strikingly dysfunctional current US president, Donald Trump — intends to "fashion a nation more pleasing to his god and corporate sponsors," cited by Dailymail.co.uk.

A groundswell of media attention following the release of advance copies of the book resulted in leading Christians in the US accusing authors and reviewers of varying levels of religious bigotry, according to the New York Times. 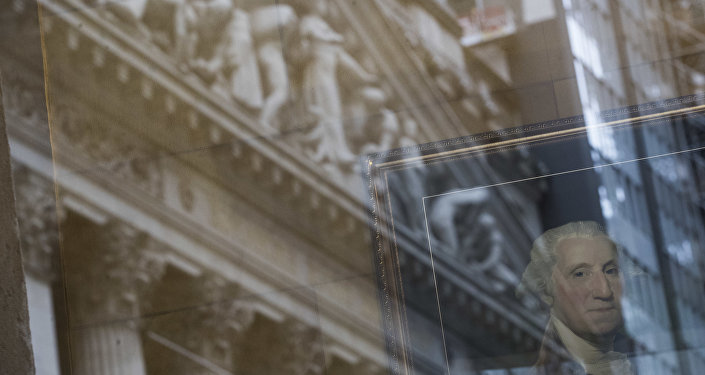 © AP Photo / Mary Altaffer
Through a Glass Darkly: US Economic ‘Boom’ Only a Numbers Game - Report

Pence responded by restating his go-to answer for governance and policy — based primarily on religion — claiming that the US is "a nation of faith," and adding that he and his religious fundamentalist supporters "stand for the things that we believe in," cited by Usatoday.com.

The vice president eagerly describes himself as a "Christian, a conservative and a Republican — in that order."

Pence, responding in February to an ABC News interview regarding the VP's claim of hearing Christianity's Jesus Christ deity speak to him and tell him what to say, said only: "I'd like to laugh about it, but I really can't."

Christian fundamentalist GOP candidates, including North Carolina Republican congressional candidate Mark Harris, have increasingly resorted to quoting scripture from their holy books as a way to detail policies of governance, a tendency that has alarmed majority science- and fact-based voters and organizations in the US.

In one of the most contested November 2018 general elections in the US, Harris's leaning on holy writ to justify a my-way-or-the-highway form of autocracy by religious decree has found many making an easy comparison between GOP lawmakers like Pence and his ilk with the more repressive forms of Islamic fundamentalism.

"The word of God has the answer to every issue in our lives," asserted Harris in a 2013 speech, declaring that his version of a Christian chief deity "instructs all Christian wives to submit to their husbands," cited by Usatoday.com.

His opponent, Democratic candidate Dan McCready, responded, "We are all created in God's image. That means men and women are equally valuable and equally capable," according to Newsobserver.com.

"Harris, is out of step with this district and this century," the Democratic candidate noted.